Biden ending US support for Saudi-led offensive in Yemen 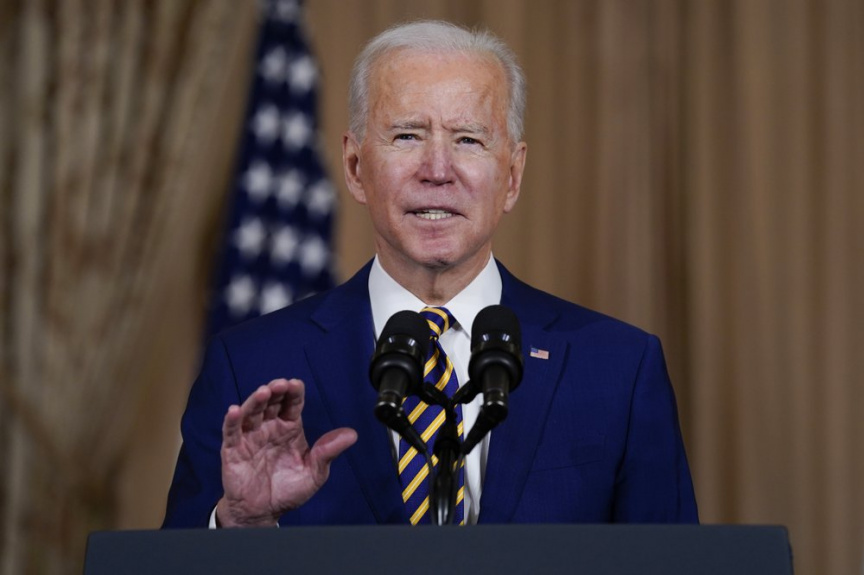 President Joe Biden announced Thursday the United States was ending support for a grinding five-year Saudi-led military offensive in Yemen that has deepened suffering in the Arabian Peninsula’s poorest country, calling the move part of restoring a U.S. emphasis on diplomacy, democracy and human rights.

“This war has to end,” Biden told diplomats in his first visit to the State Department as president, saying the conflict had created a “humanitarian and strategic catastrophe.”

The Yemen reversal is one of a series of steps Biden laid out Thursday that he said would mark a course correction for U.S. foreign policy. That’s after President Donald Trump — and many Republican and Democratic administrations before his — often sided with authoritarian leaders abroad, in the name of stability.

The announcement on Yemen fulfills a campaign pledge. But it also shows Biden putting the spotlight on a major humanitarian crisis that the United States has helped aggravate. The reversal of policy also comes as a rebuke to Saudi Arabia.

Saudi Arabia has been conciliatory in its response to rebuffs from Biden, who as a candidate blasted the kingdom’s current rulers for rights abuses and as president has made clear he intends to distance his administration from Saudi leaders. But the Biden administration also says it will help the kingdom boost its defenses against outside attacks, as part of maintaining key security, counterterrorism and military ties with Saudi Arabia, a strategic partner and global oil giant. Saudi state media focused on that part of Biden’s announcements Thursday.

“We welcome President Biden’s stated commitment to work with friends and allies to resolve conflicts, and deal with attacks from Iran & its proxies in the region,” Saudi Prince Khalid bin Salman, a son of King Salman and the kingdom’s deputy defense minister, tweeted.

Yemen, the biblical kingdom of Sheba, has one of the world’s oldest constantly occupied cities — the more than 2,000-year-old Sanaa — along with mud brick skyscrapers and hauntingly beautiful landscapes of steep, arid mountains. But decades of Yemeni misgovernment have worsened factional divisions and halted development, and years of conflict have now drawn in increasing intervention by Saudi Arabia, the United Arab Emirates and Iran.

The Obama administration in 2015 gave its approval to Saudi Arabia leading a cross-border air campaign targeting Yemen’s Houthi rebels, who were seizing ever more territory, including Sanaa. The Houthis have launched multiple drone and missile strikes deep into Saudi Arabia. The U.S. says the Saudi-led campaign has entrenched Iran’s role in the conflict, on the side of the Houthis.

U.S. targeting assistance to Saudi Arabia’s command-and-control was supposed to minimize civilian casualties in the Saudi-led airstrikes. But bombing since then has killed numerous Yemeni civilians, including schoolboys on a bus and fishermen in their boats. Survivors have displayed fragments showing the bombs to be American-made.

The stalled war has failed to dislodge the Houthis and is helping deepen hunger and poverty. International rights experts say both the Gulf countries and Houthis have committed severe rights abuses.

“Deeper U.S. engagement — and a refusal to side with dictators who have chosen bloodshed over democratic change — is vital so that the Yemeni people can return to the project of democracy” that warring parties inside and outside of Yemen interrupted, Karman said in a statement.

U.N. spokesman Stephane Dujarric said the U.S. action will give more space and more hope “not only to the talks but, more importantly, more hope to the people of Yemen.”

Biden called Thursday for a cease-fire, an opening of humanitarian channels to allow more delivery of aid, and a return to long-stalled peace talks.

Biden also announced an end to “relevant” U.S. arms sales but gave no immediate details on what that would mean. The administration already has said it was pausing some of the billions of dollars in arms deals with Saudi Arabia and the United Arab Emirates, Saudi Arabia’s main partner in its Yemeni offensive.

The ending of U.S. support for the offensive will not affect any U.S. operations against the Yemen-based al-Qaida in the Arabian Peninsula, or AQAP, group, national security adviser Jake Sullivan said.

In what was seen as the latest in several Saudi gestures toward Biden, the State Department said Thursday the kingdom had conditionally released two dual Saudi-U.S. citizens detained in a crackdown on civil society there, and reduced a sentence for a third, Dr. Walid Fitaihi, convicted of “disobedience” to the government.

The weeks-old Biden administration has made clear that shifting its stance toward the Yemen war, and toward Saudi Arabia over the Yemen offensive and other rights abuses, was a priority. Other measures have included a review of the Trump administration’s categorization of the Houthis as a terror group. Critics say the designation hinders delivery of humanitarian aid to Yemenis.

Biden also announced the choice of Timothy Lenderking as special envoy to Yemen.

Lenderking has been a deputy assistant secretary of state in the department’s Middle East section. A career foreign service member, he has served in Saudi Arabia, Kuwait and other countries in the Middle East and elsewhere.