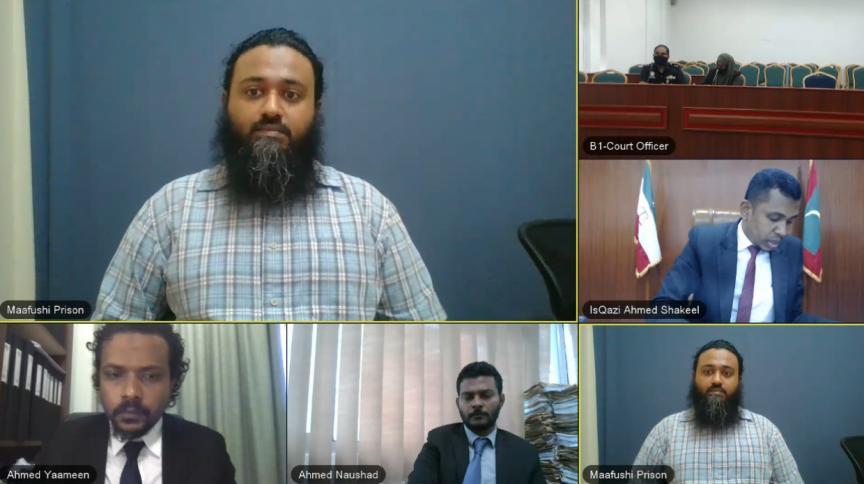 The Criminal Court ordered for Mohamed Ameen (Kariyya Villa, Maadhadu, Fuvahmulah City) – who the police believe to be a leader of terror organization Islamic State in Maldives – to be transferred to house arrest on Wednesday, revising an earlier court order to keep him detained pending the outcome of his trial.

Ameen has been charged with membership at a terrorist organization and conspiracy to carry out an act of terrorism. The Criminal Court ordered for him to be detailed pending the outcome of his trial on December 15, 2019. He is the first suspect to be arrested and charged under new revisions to the Counter-Terrorism Act.

At the Criminal Court hearing to review the detainment order on Wednesday, the State prosecution noted that Ameen is suspected of a major felony, and said they do not believe there are any grounds to justify his release.

Ameen’s lawyer pointed out that suspects in major felonies have been released on health grounds in past cases. He asked that Ameen be released from jail, arguing that Maldives Correctional Service has failed to provide him with adequate medical care while his condition continues to deteriorate.

However, officers from Maldives Correctional Service said that they are providing Ameen with adequate medical care, and listed out the dates on which he was taken for consultations with his doctors.

Ameen responded that he has not received adequate medical care despite being taken to consultations.

The State prosecution said they believe Ameen is being provided adequate medical care in jail, and asked that he remain detained.

He also said that Ameen has been adequately provided the right to go out of his cell and exercise.

Shakeel announced that given that he finds Ameen had not been adequately provided with the two fundamental rights, he has therefore made the decision to transfer him to conditional house arrest.

The conditions are that he does not venture outside of his residence, that he cooperates with the court, and that he refrains from the nature of crimes he has been accused of and any crimes in general.

The defense also asked for the opportunity to present a news article and a previous verdict by the High Court as evidence. A decision regarding the request will be made at the hearing scheduled for February 25.

Ameen was also suspected of involvement in the Sultan’s Park bombing which injured a dozen tourists in 2007. He fled the country after the bombing, prompting an Interpol red notice against him.