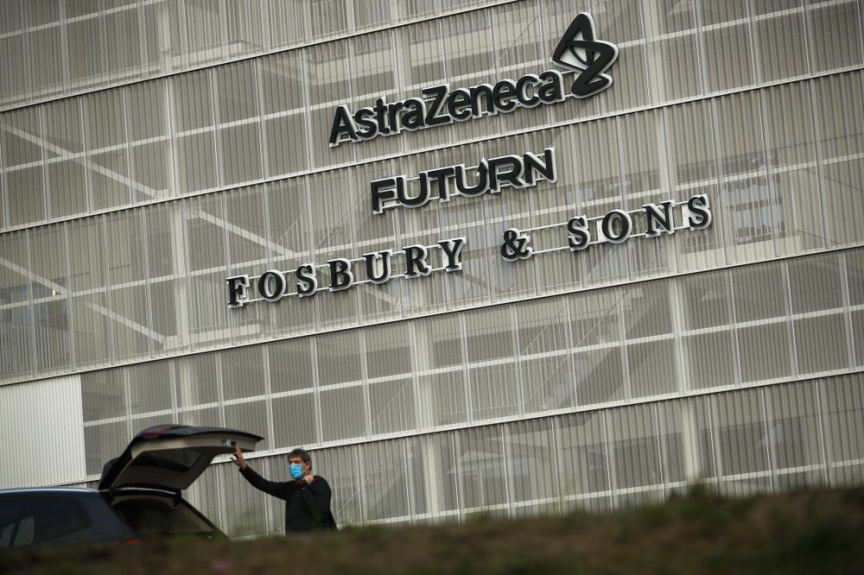 BRUSSELS (AP) — The European Union introduced tighter rules Friday on exports of COVID-19 vaccines that could hit shipments to nations like the United Kingdom, deepening a dispute with London over scarce supplies of potentially lifesaving shots.

But amid an outcry in Northern Ireland and the UK, the European Commission made clear the new measure will not trigger controls on vaccines shipments produced in the 27-nation bloc to the small territory that is part of United Kingdom bordering EU member Ireland.

Under the post-Brexit deal, EU products should still be able to travel unhindered from the bloc to Northern Ireland.

“In the process of finalization of this measure, the Commission will ensure that the Ireland/Northern Ireland Protocol is unaffected,” the EU’s executive arm said in a statement late Friday.

Amid a dispute with Anglo-Swedish drugmaker AstraZeneca, EU Commission president Ursula von der Leyen and British leader Boris Johnson had an unexpected phone call, during which the UK prime minister “expressed his grave concerns about the potential impact which the steps the EU has taken today on vaccine exports could have,” a statement from the British government read.

The EU unveiled its plans to tighten rules on exports of coronavirus vaccines produced inside the bloc amid fears some of the doses it secured from AstraZeneca could be diverted elsewhere. The measure could be used to block shipments to many non-EU countries and ensure that any exporting company based in the EU will first have to submit their plans to national authorities.

The UK and Northern Ireland governments immediately lashed out at the move, saying the bloc invoked an emergency clause in its divorce deal with Britain to introducing controls on exports to Northern Ireland. Goods are supposed to flow freely between the EU and Northern Ireland under special arrangements for the U.K. region designed to protect the peace process on the island of Ireland.

But the EU later said it was not invoking Article 16 of the Northern Ireland Protocol allowing either side to override parts of their deal.

“The Commission is not triggering the safeguard clause,” it said in its statement, adding that the restricting regulations have yet to be finalized and won’t be adopted before Saturday.

The phone call between von der Leyen and Johnson somewhat eased what was quickly becoming a diplomatic flashpoint.

“We agreed on the principle that there should not be restrictions on the export of vaccines by companies where they are fulfilling contractual responsibilities,” von der Leyen said in a statement.

The EU hit out at AstraZeneca this week after the company said it would only supply 31 million doses of vaccine in initial shipments, instead of the 80 million doses it had hoped to deliver. Brussels claimed AstraZeneca would supply even less than that, just one-quarter of the doses due between January and March — and member countries began to complain.

The European Commission is concerned that doses meant for Europe might have been diverted from an AstraZeneca plant on the continent to the U.K., where two other company sites are located. The EU also wants doses at two sites in Britain to be made available to European citizens.

“The UK has legally-binding agreements with vaccine suppliers and it would not expect the EU, as a friend and ally, to do anything to disrupt the fulfilment of these contracts,” the UK said.

AstraZeneca CEO Pascal Soriot told Germany’s Die Welt newspaper this week that the U.K. government helped create the vaccine developed with Oxford University and signed its contract three months before the EU did. Soriot said that under the British contract, vaccines produced at U.K. sites must go to the U.K. first.

To head off similar disputes and allay fears that vaccines might be diverted, the Commission introduced the measures to tighten rules on the exports of shots produced in EU countries. The “vaccine export transparency mechanism″ will be used at least until the end of March to control shipments to non-EU countries.

The EU insisted that’s not an export ban, although it could be used to block shipments to the UK or many other non-EU countries. Many poorer nations and close neighbors are exempt.

Officials said it is intended to ensure EU member nations get the shots they bought from producers. The World Health Organization criticized the new EU export rules as “not helpful.”

Director General Tedros Adhanom Ghebreyesus and other WHO officials warned of supply-chain disruptions that could ripple through the world and potentially stall the fight against COVID-19.

The “advanced purchasing agreement” with the EU was signed in August, before the Oxford-AstraZeneca vaccine had been properly tested. The European Medicines Agency approved the vaccine on Friday, making it the third authorized for use by EU nations.

Earlier, the 27-nation bloc and AstraZeneca made public a heavily redacted version of their vaccine deal that’s at the heart of a dispute over the delivery schedule.

The contract, agreed to last year by the European Commission and the drugmaker, allows the EU’s member countries to buy 300 million doses of the AstraZeneca vaccine, with an option for a further 100 million doses. It’s one of several contracts the EU’s executive branch has with vaccine makers to secure a total of more than 2 billion shots.

As part of an “advanced purchase agreement” with companies, the EU said it has invested 2.7 billion euros ($3.8 billion), including 336 million ($408 million) to finance the production of AstraZeneca’s serum at four factories.

Much of the 41-page document made public was blacked out, making it very difficult to establish which side is in the right. Details about the price of the vaccine were notably redacted. The U.K. is thought to be paying far more for the vaccine than EU countries.

France to close its borders to arrivals from outside EU