FM Shahid voices heartfelt thanks in Hindi for vaccine shipment 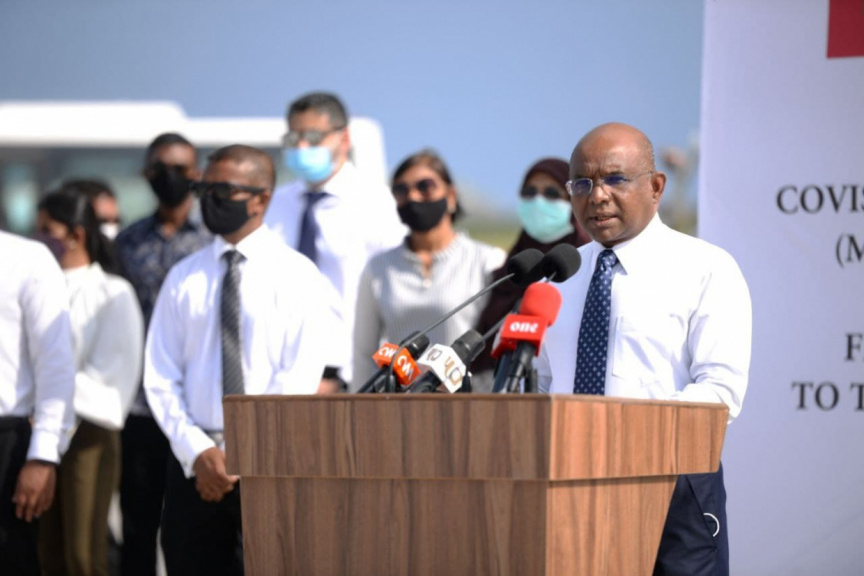 Foreign Minister Abdulla Shahid in a ceremony at the Velena International Airport to mark the delivery of the first shipment of Covishied vaccine from India on January 20, 2021. (Sun Photo/Fayaz Moosa)

Maldivian Foreign Minister Abdulla Shahid voiced his appreciation for the close relations between Maldives and India on Wednesday, as Maldives received a shipment of 100,000 doses of the Covishield vaccine developed by Oxford and AstraZeneca, donated by the Indian government.

In a ceremony at the Velena International Airport to mark the delivery of the vaccine shipment on Wednesday afternoon, Shahid said that Maldives becoming the first country to receive a shipment of the vaccine produced by India’s Serum Institute symbolizes the importance India places on relations with Maldives.

He said that India has assisted Maldives numerous times throughout the COVID-19 pandemic, and thanked India for the assistance they extended in each of the occasions.

Shahid said that the Covishield vaccine has completed the third trial and is safe for use. He also said that the Serum Institute is one of the largest manufacturers in the world, producing more than 1.5 billion doses annually.

Delivering parts of his statement in Hindi, Shahid said he wishes to say heartfelt thanks to the assistance extended by India to Maldives amid the current situation.