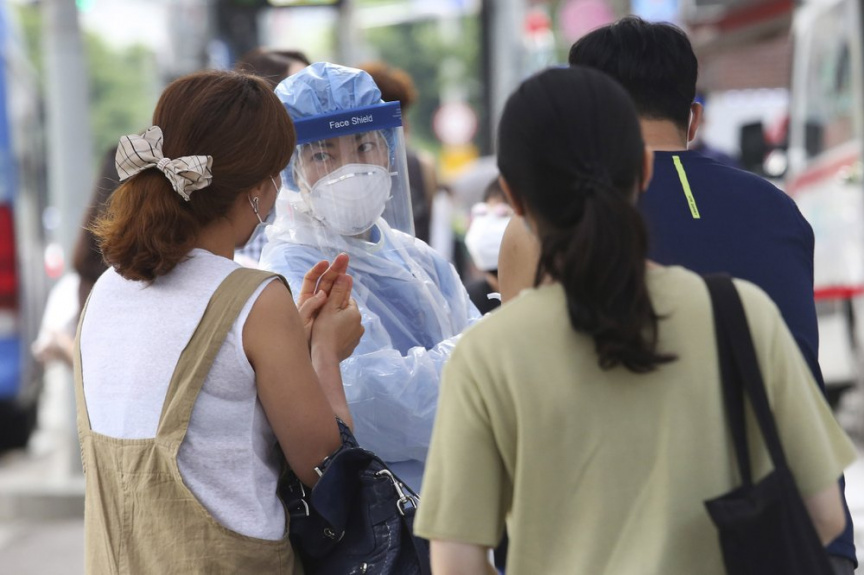 A medical worker guides people during the COVID-19 testing at a makeshift clinic in Seoul, South Korea, Wednesday, Aug. 26, 2020. Health officials in South Korea called on thousands of striking doctors to return to work as the country counted its 13th straight day of triple-digit daily jumps in coronavirus cases.(AP Photo/Ahn Young-joon)

South Korea has added another new 1,092 infections of the coronavirus in a resurgence that is erasing hard-won epidemiological gains and eroding public confidence in the government’s ability to handle the outbreak.

The figures released by the Korea Disease Control and Prevention Agency on Wednesday brought the national caseload to 52,550, with more than 13,130 cases added in the last two weeks alone.

Seventeen COVID-19 patients died in the past 24 hours, bringing the death toll to 739 as concerns grow about a shortage in intensive care beds. At least 284 of the country’s 15,085 active patients were in serious or critical condition.

South Korea had been seen as a success story against COVID-19 after health workers managed to contain a major outbreak in its southeastern region in spring, when the majority of infections were linked to a single church congregation in Daegu city.

But critics say the country gambled on its own success by easing social distancing restrictions to help the economy. The spread of the virus is now mainly in the densely populated capital region, and health workers are struggling mightily to track infections occurring just about everywhere, including hospitals, long-term care facilities and army units.

The government has restored some social distancing restrictions in recent weeks and will clamp down on private social gatherings of five or more people between Christmas Eve and Jan. 3. Restaurants could be fined if they accept large groups, ski resorts and national parks will be closed, and hotels cannot sell more than 50% of their rooms during the period.

South Korea is also stepping up border controls, halting air travel from Britain at least through Dec. 31 over concerns of a new and seemingly more contagious variant of the virus that has been identified in southeast England.

Senior Health Ministry official Yoon Taeho said during a virus briefing that South Korean diplomatic offices in Britain will also stop issuing quarantine waivers so that all passengers coming from the country are placed under isolation for at least two weeks until a negative test.

Yoon acknowledged it would be difficult to fully detect all passengers who stopped or stayed in Britain if they arrive through other countries, but noted that neighboring European nations have also strengthened their border controls for people coming from Britain.

Thirty-two of the new cases reported by the country were linked to international arrivals, including four passengers arriving from Britain. South Korean authorities have not yet reported a local case of the new variant of the virus.

Beds in short supply as SKorea sees another jump