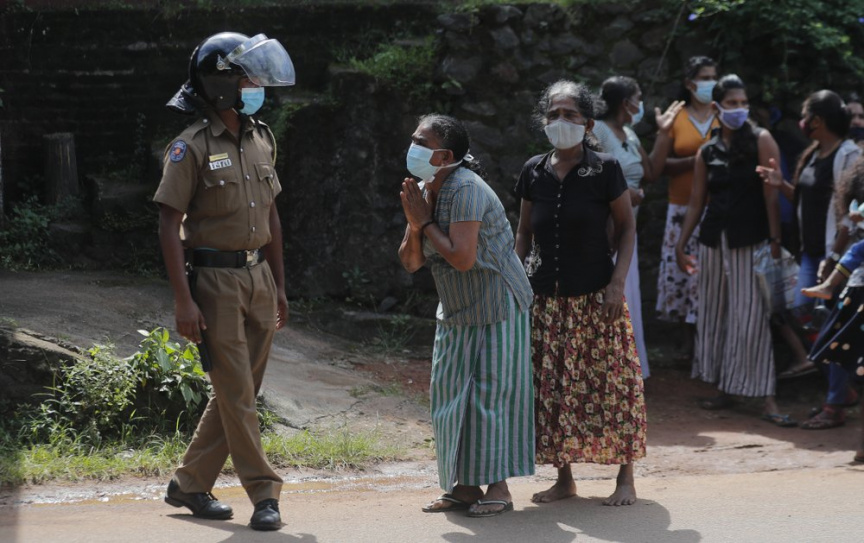 A family member of an inmate pleads to a policeman as she seeks information on the condition of her relative outside the Mahara prison complex following an overnight unrest in Mahara, outskirts of Colombo, Sri Lanka, Monday, Nov. 30, 2020. (AP Photo/Eranga Jayawardena)

The government of Sri Lanka has stated that the Maldives has offered to bury Sri Lankan Muslims who pass away due to COVID-19.

The Sri Lankan government has previously announced that the bodies of those who pass away from the virus will have to be cremated, not buried, which goes against Islamic customs. The issue has caused discontent among the Muslim community of Sri Lanka.

The Health Ministry of the nation has now been instructed to find out if the plan is feasible and to formulate guidelines for the process. No word from the Maldivian Foreign Ministry is available on the matter yet.

“The Maldives has stepped in to facilitate this process because they are broken up into islands and do not face the same issue as us. The Maldives Government has offered to bury the dead bodies in one of their islands. The Health Ministry will prepare its guidelines and hand over to the Foreign Ministry so that they can respond officially,” Dr. Herath said to the Sri Lankan news outlet.

“We do not know how practical this is till the feasibility is conducted. The practical options have not been explored yet. Only then we can tell if this is going to happen or not,” he added.

Silent protests over the mandatory cremation have also been held in the capital Colombo, according to the Mirro. Protests got underway in Colombo yesterday with participants tying white handkerchiefs and clothes outside the Borella cemetery, to remember those victims who were forcefully cremated.