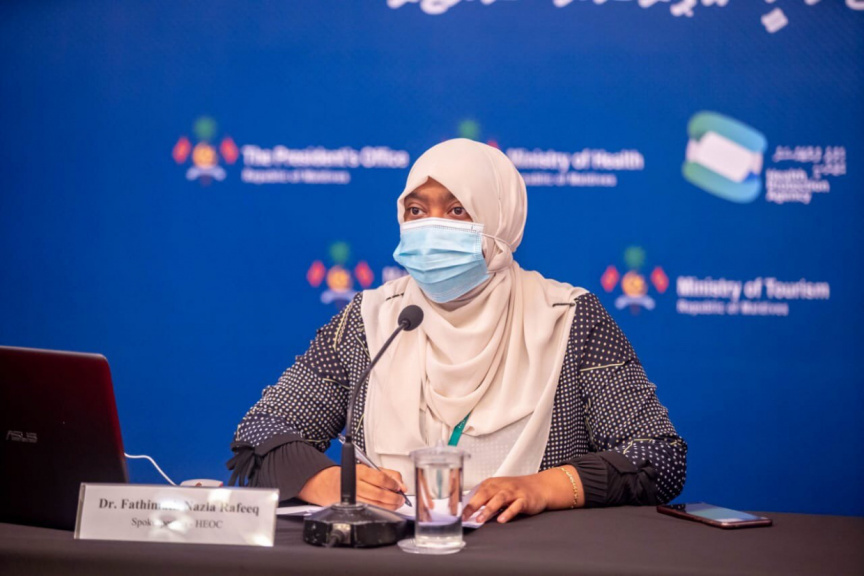 Health Emergency Operations Center (HEOC) has announced that the Maldives would commence mass vaccinations within the first three months of 2021.

In a press conference underway, HEOC Spokesperson Dr. Nazla Rafeeq said that the COVAX facility for vaccine distribution had accepted the application by the Maldives to receive vaccines. Under the initiative, 20 percent of the Maldivian population will receive vaccines without any charges.

“We are trying to obtain the vaccine as soon as possible. We can estimate that vaccines could be administered within the first quarter of 2021.” Said Dr. Nazla.

HEOC said that 17 percent of the vaccine received would be administered to those aged above 50, high-risk individuals, and frontline workers.

Dr. Nazla also added that discussions would be held with other nations to obtain vaccines for the remainder of the population. Authorities were also working on the logistics of transporting vaccines to different islands and facilities of the nation.

“The work is underway swiftly. When the vaccine is obtained, god willing it will be finished.” Said Dr. Nazla.

Dr. Nazla said that the authorities have not yet finalized the vaccine that would be obtained by the Maldives but said that it would be decided upon the safety standards set out by the WHO for these vaccines.

She also expressed concern over the misinformation regarding vaccinations in the Maldives as of recently. She maintained that only the safest of vaccines would be administered for Maldivians and urged to dispose of any such misunderstandings.