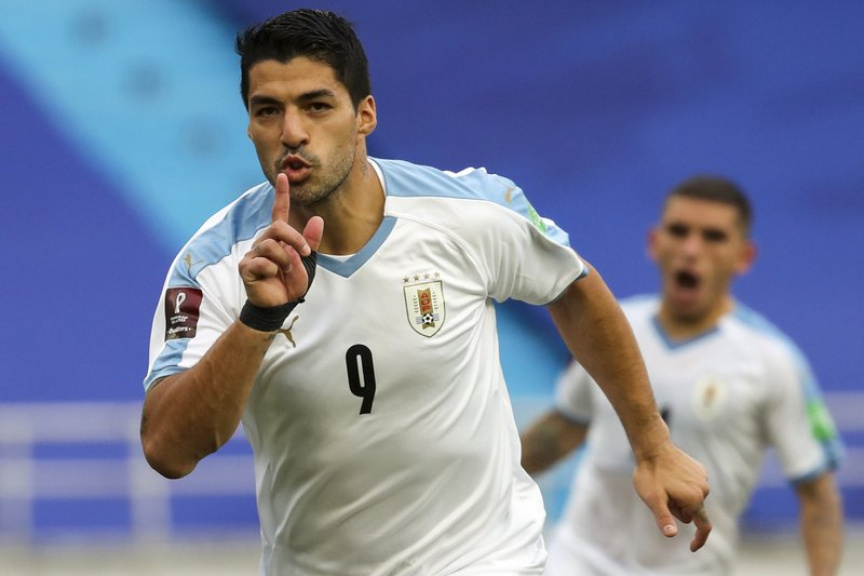 Uruguay's Luis Suarez celebrates after scoring from the penalty spot his side's second goal against Colombia during a qualifying soccer match for the FIFA World Cup Qatar 2022 at the Metropolitano stadium in Barranquilla, Colombia, Friday, Nov. 13, 2020. (AP Photo/Fernando Vergara)

TURIN, Italy (AP) — A director at storied Italian soccer club Juventus was revealed on Friday to be a suspect in a criminal investigation linked to the attempt to sign Luis Suárez.

Juventus said in a statement its sports director Fabio Paratici has been notified of his involvement in an investigation by prosecutors in the city of Perugia.

Suárez was linked to a move in September from Barcelona to nine-time defending Serie A champion Juventus.

The Uruguay forward started the process to get an Italian passport that would ease the move, and sat an Italian language test that was allegedly fixed for him.

If Suárez had Italian citizenship he would not need to occupy a Juventus quota spot for non-European Union players.

The move did not happen and Suárez instead joined Atlético Madrid.

Juventus said it “strongly reiterates the correctness of Paratici’s work and is confident that the ongoing investigations will help clarify his position within a reasonable time.”

Paratici is a former player who has worked for 10 years at Juventus.

“He joined Juventus in 2010,” Paratici’s biography on the club website states, “during the first few days of President Andrea Agnelli’s reign, to whom he linked a path of growth and success both on the field and in the management of the club’s sports area.”

Agnelli is a member of UEFA’s executive committee and chairman of the influential European Club Association that represents around 250 of the continent’s most successful teams.