President: Soldiers need to be loyal, work to uphold the government 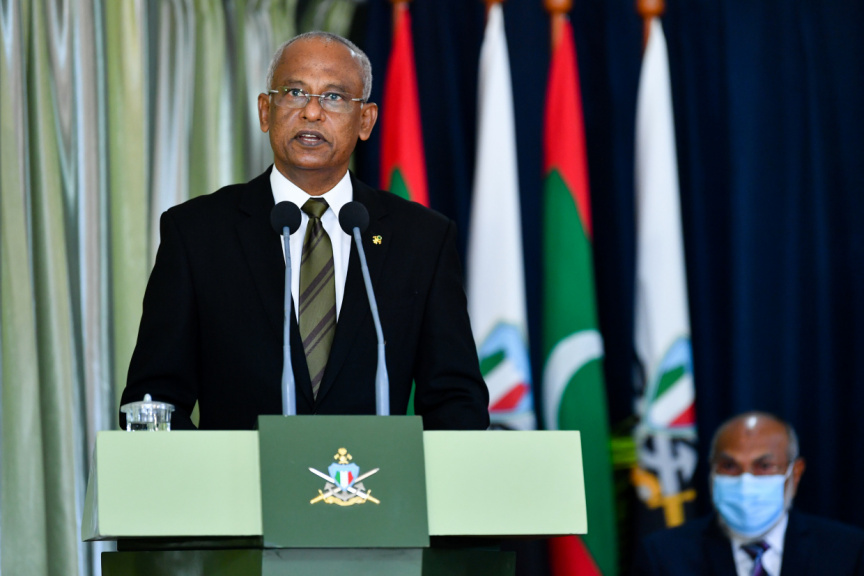 President Ibrahim Mohamed Solih at the oath taking ceremony of the graduates of the 66th MNDF basic training program on November 26, 2020. (Photo/President's Office)

President Ibrahim Mohamed Solih has appealed to officers of Maldives National Defense Force (MNDF) to remain committed to working to upholding the legitimate government elected by the Maldivian people.

Attending the oath taking ceremony of the graduates of the 66th MNDF basic training program in Lh. Maafilaafushi on Thursday morning, President Solih said that soldiers need to have three core values, including protection of the Islamic faith and putting national interests ahead of individual interests.

President Solih said that by joining the MNDF and taking the oath, they are answering the call for an unhesitant ‘yes’ to everything asked of them by their nation.

President Solih said the whole of MNDF needs to be united on the front, working as a close-knit family.

He called for the MNDF to strengthen unity and solidarity.

“It’s a strong family of mutual respect and love. Therefore, soldiers need to set aside their individual interests, and must always prioritize the interests of the whole military,” he said.

President Solih said the MNDF is based on a proud 128-year history of loyalty and honesty.

“It is the heroes born of this very institution who foiled all plots by traitors to besmirch the name of this nation. Therefore, I have no doubt that you, our soldiers, will uphold the honor and prestige of the military,” he said.

President Solih said he believes Maldivian soldiers are well-versed in military conduct and talent, and has full confidence in the Maldivian military prowess.

He described Maldivian soldiers as brave and resolute.

Safeguarding Maldives from terrorism is a high priority