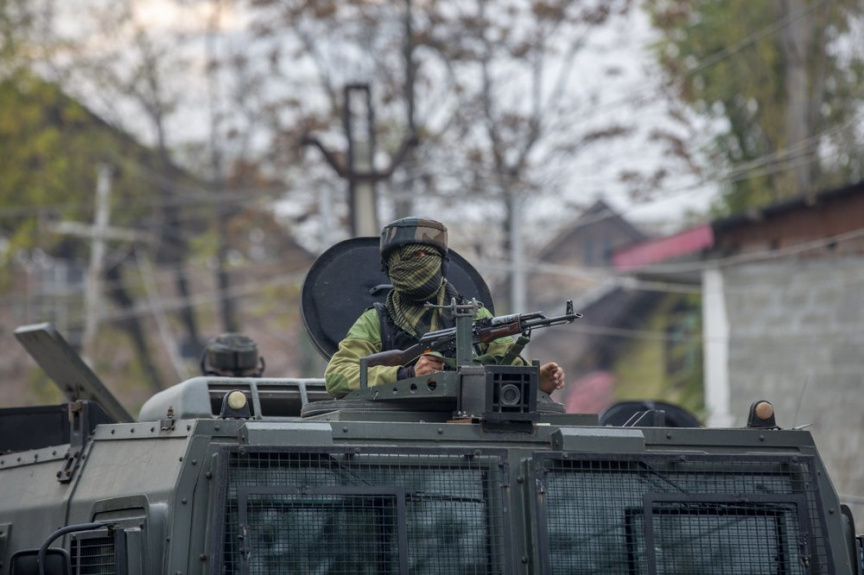 An Indian army soldier stands guard atop an armored vehicle near the site of a gun battle on the outskirts of Srinagar, Indian controlled Kashmir, Sunday, Nov. 1, 2020. (AP Photo/ Dar Yasin)

The fighting in Kupwara district started at around 1 a.m. after the Indian paramilitary soldiers spotted the rebels around 3.5 kilometers (2 miles) into India’s side of the cease-fire line dividing Kashmir between India and Pakistan, said army spokesperson Col. Rajesh Kalia.

The army rushed troop reinforcements in after the first three hours of exchange of gunfire killed one Indian paramilitary soldier and one rebel, Kalia said.

Fighting resumed after a lull of several hours, killing three Indian army soldiers and injuring another two, he said, adding that two more insurgents were killed before the firing subsided.

India accuses Pakistan of arming and training insurgents to attack Indian soldiers and other targets in the region, a charge Islamabad denies.

Kashmir is divided between India and Pakistan, but the rivals each claim the region in its entirety. The two countries have fought three wars, two of them over control of Kashmir, since British colonialists granted them independence in 1947.

Rebels have been fighting against Indian rule since 1989. Most Muslim Kashmiris support the rebel goal that the territory be united either under Pakistani rule or as an independent country. Tens of thousands of civilians, rebels and government forces have been killed in the conflict.