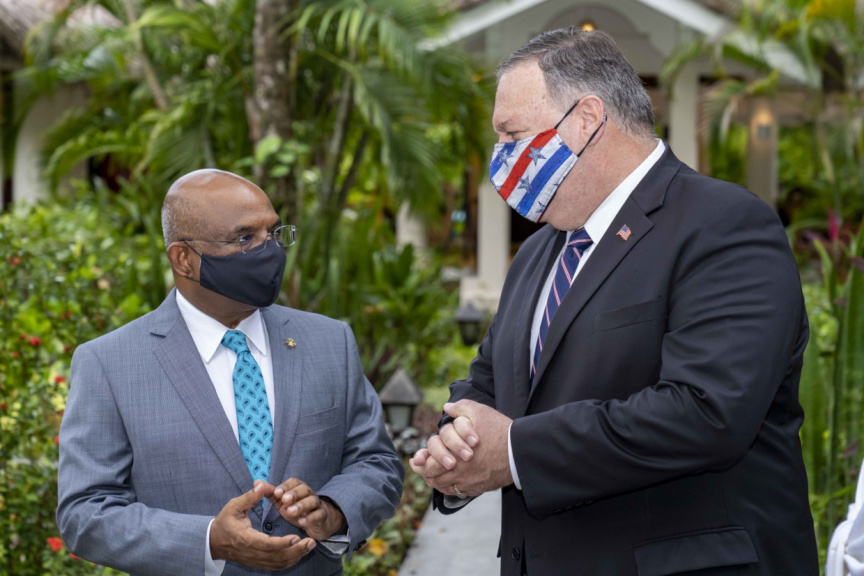 October 28, 2020: US Secretary of State Mike Pompeo with Maldivian Foreign Minister Abdulla Shahid during his official visit to the Maldives. (Photo/Foreign Ministry)

The Secretary of State of the United States Mike Pompeo, in an official visit to the Maldives yesterday criticized China.

The secretary was speaking in a press conference held at Sheraton Maldives Full Moon Resort and Spa where he was accompanied by Maldivian Foreign Minister Abdulla Shahid. Secretary Pompeo stated that the US very much took importance on its relationship with small island nations such as the Maldives and their security.

“[Security of small island nations have taken new importance] As the Chinese Communist Party continues its lawless and threatening behavior. We see that behavior in the…illegal militarization of the South China Sea. We see encroachments into its neighbor’s economic zones. And we see it when Chinese state-owned companies trash the environment.” Said Secretary Pompeo.

Secretary Pompeo said that Chinese activity in illegal fishing had led to harmful effects on the industries, economies, and livelihoods of countries ranging from Madagascar to Indonesia which the Chinese government had failed to stop despite pledging to do so.

“America is different. We respect the sovereignty, we urge transparency, and we build friendships and partnerships. And with that foundation set, I am confident that we will have plenty of new opportunities between our two countries, especially now that the new diplomatic presence is coming into place.” Said Secretary Pompeo.

“I am here now because the United States values our friendship and we see important opportunities between our two countries to work together like we have never done before.” Said Secretary Pompeo who also noted that very productive dialogue was held with Maldivian leaders. The Secretary said that the US believed in a free and open Indo-pacific and that the US would always value sovereign nations who value their democracy.

“It is safe to say that our bilateral relationship has never been better. We are cooperating on everything from economic development to counter-terrorism an area in which our collaboration has increased significantly since the Trump administration.” Said Secretary Pompeo.

Secretary Pompeo also announced in his trip that the US was planning to open its embassy in the Maldives as well as the appointment of a resident ambassador. Foreign Minister Shahid described the move as symbolic of how the US saw the Maldives and attributed the move to the Maldivian government’s work on strengthening democracy and human rights as well as the rights of the citizens which would only be increased with the move.

“It is a historic decision [opening a US embassy]. Because of it, the relationship between our two nations will prosper even more.” Said Minister Shahid.

Hugo Yon nominated as US ambassador to Maldives