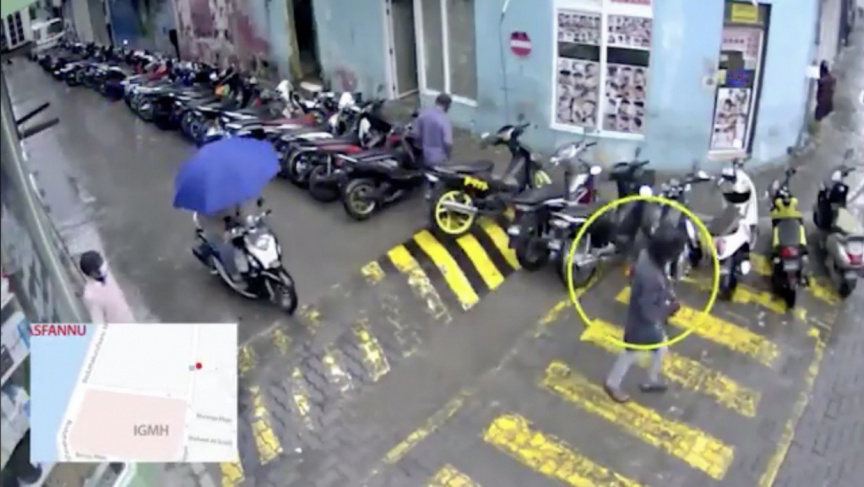 Screen grab from video footage of Sidhrathulla Ahmed, 32, taken from CCTV cameras in Male' on October 22, 2020.

Maldives Police Service has released a video of the last known sighting of a young man who was found dead in the lagoon of Male’ City last weekend, and has asked for assistance from the public in the investigation into his death.

Sidhrathulla Ahmed, 32, was found dead in the lagoon towards Indhira Gandhi Memorial Hospital (IGMH) with injuries on his body on Friday morning.

The police released 32 second video clip taken from a CCTV cameras on Tuesday afternoon, which shows Sidhrathulla walking along Bluekiyaa Magu and Thaajuddin Hingun, towards the Rasfannu beach area.

The police said Sidhrathulla was last seen alive walking towards the Rasfannu beach area between 09:00 am and 10:00 am on Thursday – one day before he was found dead.

The police have asked for anyone who may have met or seen him in the area on Thursday, and anyone with information regarding the circumstances of his death, to come forward and share the information with the agency.

The police have stated that preliminary investigative results show Sidhrath had not died of natural causes, and that they have decided to conduct an autopsy to determine the cause of the death.

However, it is unclear if the autopsy has been conducted as of yet.

Sidhrathulla’s family believes he was murdered, and said he was found with multiple injuries.