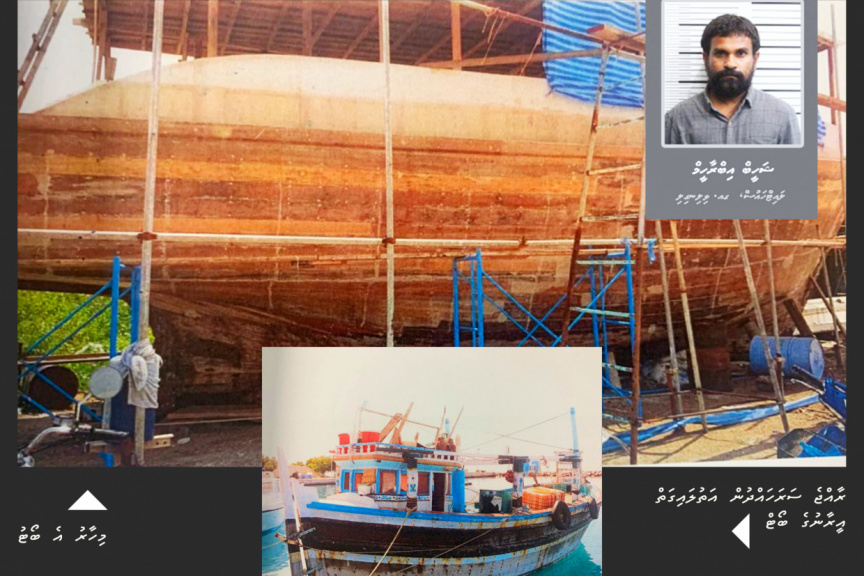 A Maldivian has taken over ownership of an Iranian boat captured with drugs in Maldivian waters last year, and is converting it to a safari boat.

The boat was captured in a joint operation by the Coastguard and Maldives Police Service from approximately 48 nautical miles to the west of A. Dh. Himadhoo in November, 2019.

Credible sources inform Sun the boat is now in the K. Hinmafushi boat yard. This information has been verified through the Hinmafushi Council.

The boat was captured with 7 Iranian nationals, and is linked with People’s National Congress (PNC) councilman Shaheeb Ibrahim, 42, who was recently arrested in connection to a 130 kilo drug bust, and is believed to be one of the ringleaders of a local drug trafficking network.

According to the information available to Sun, Shaheeb, after he claimed responsibility for the boat at the court, contracted it to a carpenter from Hinmafushi for conversion to a safari vessel. The work remains in progress, and Ismail Rasheed – one of the suspected members of Shaheeb’s drug trafficking network – acted as middleman.

Ismail Rasheed had previously been arrested with 1 kilo in drugs in Hinmafushi.

Sun has received photos which show a large part of the conversion process is now complete.

Shaheeb paid a large amount of money as an advance to the carpenter to get the work done.

The police had found a lower quantity of drugs from the boat than they had expected, and believe it could have been due to two possible reasons; either the drugs had been transferred to another boat at the border, or the drugs were thrown overboard when they saw the authorities approach.

The police are certain of one thing; the boat was the one used to smuggle the drugs into Maldives.

The 7 Iranian nationals arrested in the operation were later released, with the Prosecutor General’s Office deciding to deport them instead of prosecuting them.

According to the investigative findings, the boat was captured while in distress following engine failure and there is no evidence they had the intention of smuggling drugs into Maldives, said the Prosecutor General’s Office, citing the reason for the decision.

Iranian boats are among the most frequently captured international  boats by local authorities in drug operations.