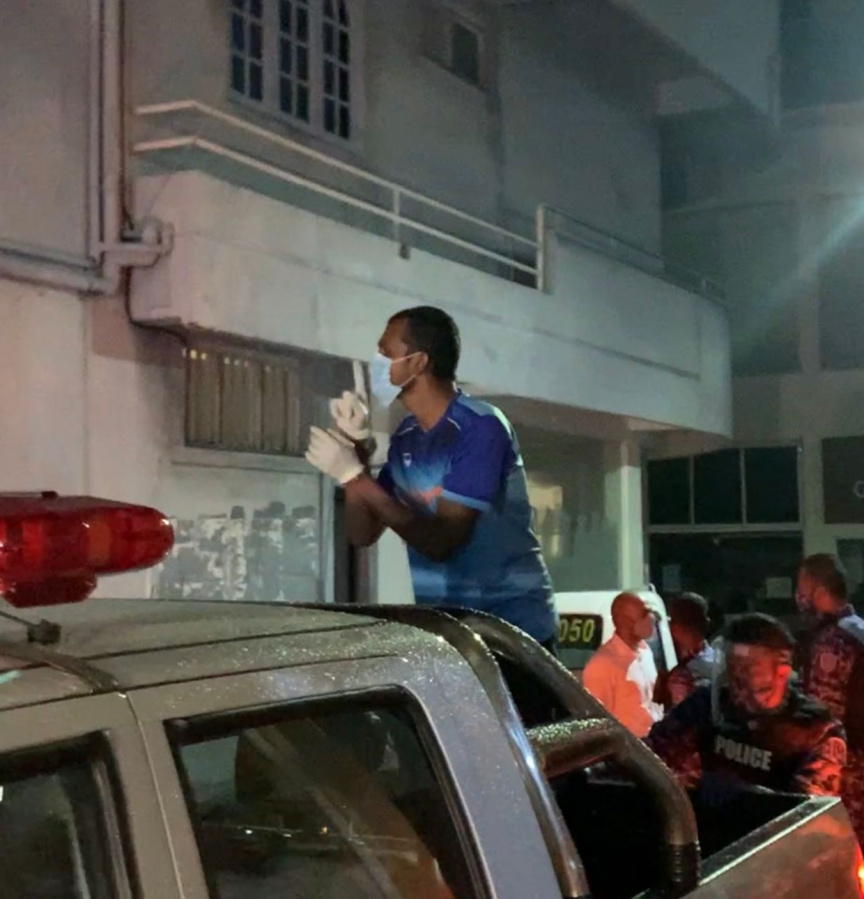 34-year-old alleged local militant gestures as he is arrested by the police on October 15, 2020. (Sun Photo)

The Maldivian man who was arrested last week after he returned from overseas after alleged involvement in militant activities in Syria has been transferred to the National Reintegration Center built in K. Hinmafushi to rehabilitate religious extremists.

It marks the first time for someone to be held at the center.

The suspect in question, identified by the police as a 34-year-old Maldivian male, was arrested on October 15. According to Commissioner of Police Mohamed Hameed, the man is suspected of taking part in terrorist activities in Syria, and had been flagged on the potential list of Maldivian Foreign Terrorist Fighters (FTF).

His arrest came within hours after his return to Maldives.

According to Counter-Terrorism Act, suspects arrested after they return to Maldives after engaging in militant activities overseas must be held a designated temporary facility for 30 days to conduct a risk assessment.

In a statement on Saturday afternoon, the Home Ministry said that the 34-year-old man is suspected of having returned to Maldives from a conflict zone, and as such, was ordered to be held in the National Reintegration Center for 30 days for a risk assessment when presented before the Criminal Court for his remand hearing on Friday.

The Home Ministry designated the facility built in Hinmafushi as the National Reintegration Center required to be built under the Counter-Terrorism Act on Thursday.

The Home Ministry described the decision as a progressive step towards protection of the Maldivian community from the threat posed by people who return to Maldives after engaging in militant activities overseas, and to prosecute and hold them accountable for their crimes.

Many of the Maldivian men who travelled to Syria have died during the conflict, leaving their widowed wives and children stuck in refugee camps unable to return home.

Their families have appealed to the government to allow them to return back home.