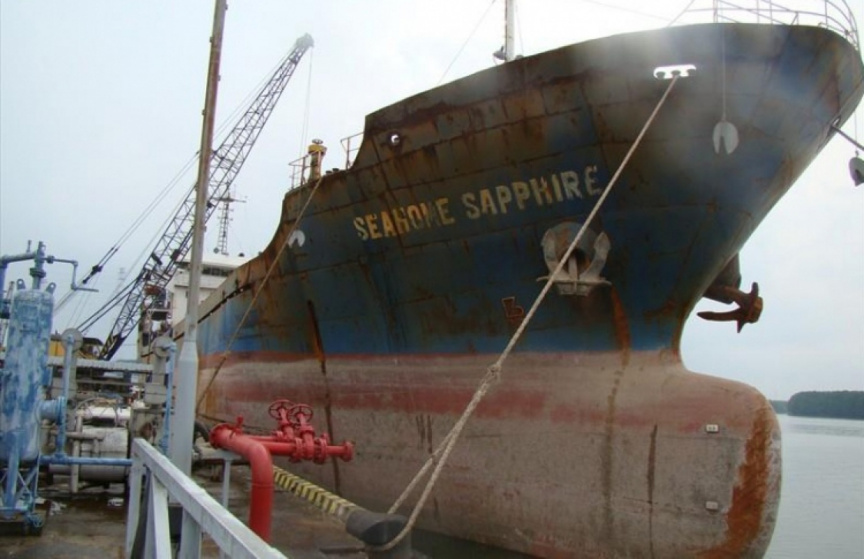 The Civil Court has ordered for the payment of MVR 9.2 million as compensation to Parkone Investment, which was hired to remove MV Seahome Sapphire, an unclaimed ship off K. Thilafushi, in a lawsuit filed by the company against Greater Male’ Industrial Zone Limited (GMIZL).

Following a court ruling to remove Seahome Sapphire, which had been docked illegally off Thilafushi since 2012, GMIZL hired Parkone to dismantle the ship for scrap metal and remove it from the location. Under the terms of the contract, Parkone was to complete the work within 30 days, and have the ownership of the ship transferred to it.

After Parkone began dismantling the ship, the police halted the work under with a warrant from K. Guraidhoo Magistrate Court. The warrant was later cancelled.

After the police halted the work, Parkone filed a lawsuit against GMIZL with the Civil Court, asking for USD 780,000 (MVR 10. 9 million) as compensation.

The Civil Court made its decision in the case on Wednesday, ruling that Parkone is entitled to compensation.

Civil Court judge Ali Naseer ordered for USD 597,800 (MVR 9.2 million) as compensation – the money which Parkone would have earned if it had dismantled the ship and sold it as scrap metal.

GMIZL has been ordered to pay the compensation within the next three months.

The Civil Court noted in its ruling that GMIZL does not reserve the right to authorize for the ship to be dismantled and sold as scrap metal.

GMIZL previously argued at court that it is not liable for compensation to Parkone, and that the decision to destroy the ship was made with a Board resolution, a court warrant, and permission from Finance Ministry.

However, Finance Ministry stated it did not authorize for the ship to be destroyed, and the Parliament’s State-owned Enterprises Committee had previously made the decision take action against the officials who involved in making the decision for negligence.

Seahome Sapphire had remained unclaimed in Thilafushi for years. Ownership of the ship was transferred to the State by Civil Court following a case lodged over the environmental damage and obstruction to projects arising from the ship lying unclaimed. Former Thimarafushi MP Mohamed Mustafa had later filed a lawsuit claiming ownership of the ship.