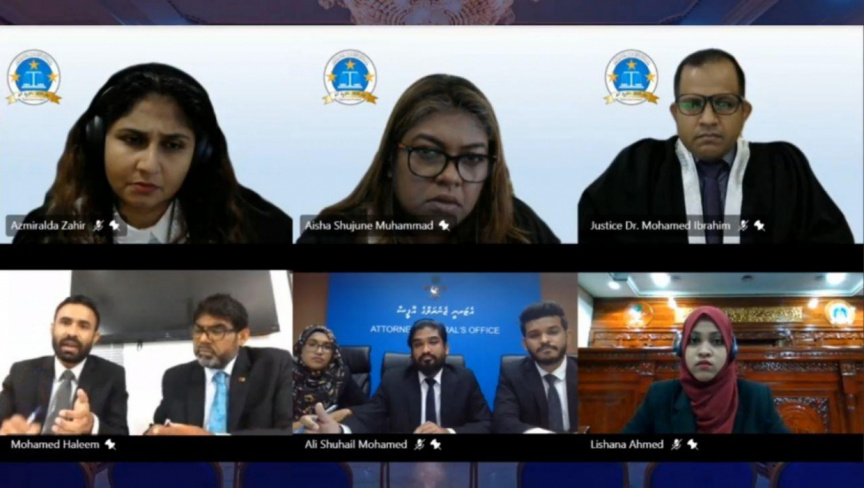 Dheebaja Invest company has said that the Supreme Court ruling made on the MVR 348 million compensation case previously cannot be reviewed.

Lawyers for the company were speaking in the hearing for a review of the case in the top court today when the statement was made. Dheebaja was awarded a compensation payment of MVR 348 million for unlawful termination of a contract by the state. The move was upheld by the Supreme Court in an earlier ruling.

After the termination, Dheebaja claimed against the state and the matter was taken up in court. The Civil Court ruled against the state and ordered it to pay MVR 348 million to the company as compensation for the terminated contract. However, on appeal, the High Court overruled the lower court, only to be overruled by the Supreme Court once again on appeal, which maintained the original ruling of the Civil Court based on procedural issues.

The current administration initially agreed to pay the compensation only to retract the move due to immense public pressure. The first hearing of the case after being submitted for review by the Attorney General in March was held today.

In today’s hearing, state prosecution stated that there were instances when the Supreme Court could review a case retrospectively in cases of systematic procedural issues and violations of the laws. State prosecution also said that the earlier ruling of the top court in the case was a gross violation of justice and prevented the state from appealing in the case where delays in the High Court appeal case which was due to circumstances not in the power of the state. The previous ruling of the Supreme Court in the case based on procedural issues meant that the High Court had the power to rule on the case without a clear decision and ruling on the matter.

The state requested the Supreme Court overrule the previous ruling on the procedure after a review of the case. If a decision was to be made on the case topic, to make a clear ruling of supporting the High Court ruling.

Dheebaja said that the case could not be reviewed due to an ‘eternal’ decision being made on the case by the court earlier. Dheebaja said that such a review was not something practiced in other jurisdictions as well. The company also noted that the case was submitted to Supreme Court under an appeal form and questioned how the top court had received a case for review when it had previously made a ruling on the case.

Another lawyer for Dheebaja Mohamed Faisal said that the delay in appeals of the case at lower courts was due to the negligence of state prosecutors. This was not an acceptable reason and the lawyers also noted that the state had accepted the ruling and prepared to implement the ruling.

“The state position should not be on switching stands from one time to another.” Said the lawyer who added that the state needed to clarify on the jurisdiction of the Supreme Court when submitting a case for review for a second time. A ruling on the procedural issue must also be made first and foremost, said Faisal who went on to say that the switching of stands by the state also needed to be clarified.

The state previously said that the delay in the case appeal was due to delays by the Civil Court in completing the report of the case. The Civil Court had only awarded a four-page ruling on the case, which meant that a ruling for a compensation of MVR 348 million by the court was unclear, according to the state.

The settlement committee had agreed on compensation of MVR 174 million, however, the Parliament intervened and voted to send the case for a review to the Supreme Court. President Solih has previously said that the public had expressed concern over the Supreme Court ruling on the matter previously.