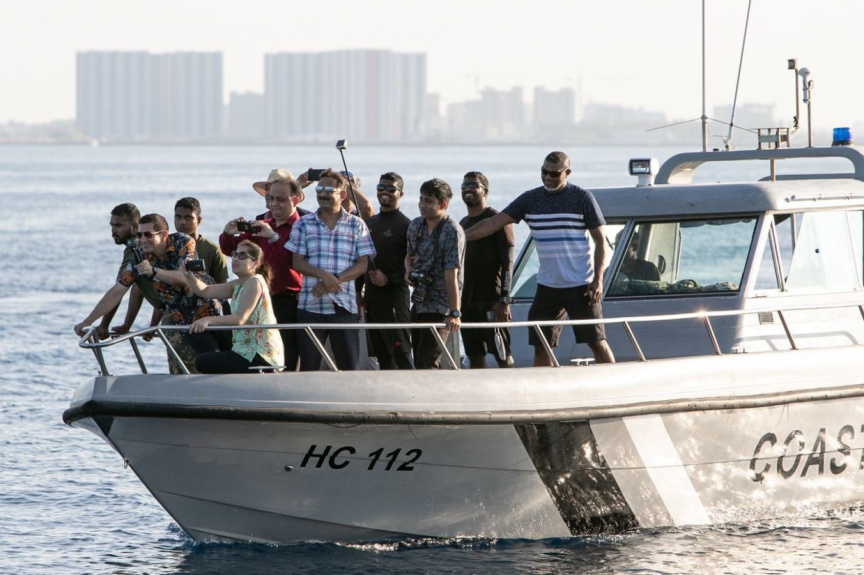 The photo which is not authenticated shows an MNDF vessel boarded by people other than military personnel.

The photo above has been circulating on social media since yesterday evening. A source of contention among the public, the photo has drawn a number of questions from the public who are outraged about it. Some say that the photo is a fake while others believe its credible and are now targeting the government with heated criticism.

The photo, if real, shows something extremely concerning. It shows a military vessel of the Maldivian Defense Force (MNDF) boarded by people other than military personnel. A total of 13 are seen on the boat, with some distinguishable as foreigners. People commenting on the photo say that they are Indian nationals. However, there is no clear indication of this.

The main concern is that a military vessel is being used for other purposes by possible foreigners. Some even said that the vessels were used as picnic and leisure vessels. What is clear, is that the public is not happy with this.

However, the Defense Force and Ministry remain tightlipped on the photo. Journalists have been questioning authorities including MNDF since yesterday with no avail.

Whether the photo is authentic, still remains to be confirmed by the MNDF. Repeated attempts at questioning have also gone unanswered.

The defense force is now the subject of stern criticism due to the numerous versions circulating.

The photo also coincides at a time when MNDF and the government are on the short end of criticism due to the presence of Indian military personnel in the Maldives. Opposition and members of the public have also been carrying an ‘India Out’ campaign against the military presence, something again which the Defense Ministry remains silent on.