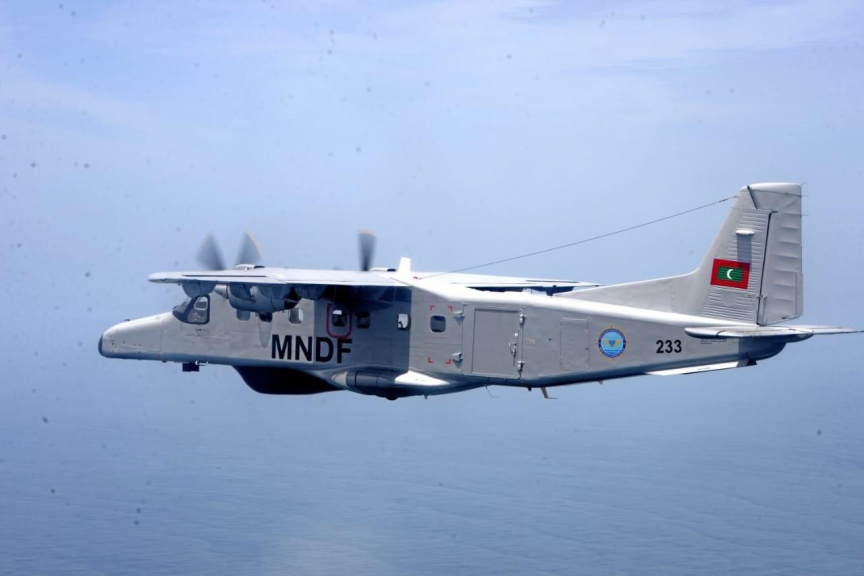 India donated a Dornier military aircraft to the Maldives on September 29, 2020.

Maldives National Defense Force (MNDF) has refused to disclose information on who will be operating the Dornier aircraft recently donated by India to the Maldivian military.

The boat arrived in the Maldives along with Indian military personnel last Tuesday. MNDF has limited the information it discloses regarding the aircraft.

Before a statement was issued by the Maldivian military, it was the Indian High Commission in the Maldives that revealed information on the aircraft.

The statement by the Indian High Commission read that aircraft will be stationed in the northern MNDF base of Hanimaadhoo and will be operated on the command and control of MNDF. The Indian government will be bearing the operating costs of the aircraft, read the statement.

The aircraft is to be used for Search and Rescue operations as well as Maritime/EEZ surveillance and Humanitarian Assistance and Disaster Relief for Maldivians in the north. The aircraft will also assist in ongoing joint EEZ surveillance activities by India and the Maldives, according to the Indian High Commission.

“The flight will fly with the colors of the Maldivian flag, MNDF pilots will also take part.” Said an MNDF media official in the media group.

MNDF still has not disclosed much-required information about the aircraft to the public. They include questions regarding who will be operating the aircraft exactly directly.

MNDF has previously stated that Maldivian pilots have been trained for operations of the boat. The Information regarding the capacity and the number of Maldivian pilots capable of operating the aircraft also remain unknown.

Sun has attempted to clarify the information on three separate occasions, only to be put off by MNDF media who stated that the information requested will be revealed later on.

MNDF, on Tuesday, stated that the aircraft will be operated by the Coastguard for maritime surveillance and stopping illegal fishing activity in Maldivian waters. In addition to this, the aircraft will be used for search and rescue as well as anti-drug trafficking operations.

The presence of the Indian military in the Maldives has been a contentious issue among the public. Two helicopters donated by India are stationed in L. Atoll and Addu Atoll of the Maldives. The aircraft are operated by Indian personnel who are also involved in its maintenance.