HEOC: Reduced virus numbers do not mean Maldives is in a safe zone 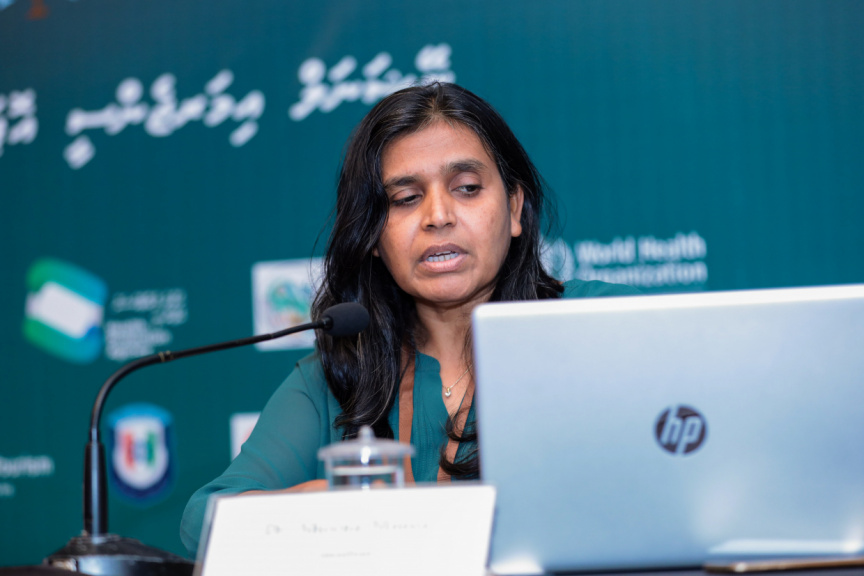 Health Emergency Operations Center (HEOC) Consultant, Dr. Sheena Moosa has warned that the Maldives was not fully out of the woods yet, in relation to the situation with COVID-19.

Dr. Sheena was speaking in a presser last night when she said that the country was not in a "safe" zone or "green" zone, despite the fall in the number of positive cases on a daily basis.

She did, however, note that the reduced figures were a positive sign. Dr. Sheena said that the number of unlinked cases was also dropping.

"However, it is not at a level we want yet. The trajectory is downward. But we are still not at a safe level." said Dr. Sheena who said that it was a target to keep unlinked cases below 20. This was only when the authorities could definitely say that the virus was slowing down.

"So, we have a bit of work to be done." said Dr. Sheena. She also stressed that there were other indicators that had to be taken into account such as positive cases from flu clinics which also showed how the epidemic was spreading.

The effects of the measures such as banning of vehicles during a certain time, mandatory mask rules, and curfew were slowly being felt by the nation. Statistics shared by Dr. Sheena showed that case numbers have started to die down after the measures were imposed.

However, this did not mean that the country was in a "green zone" and Dr. Sheena advised the public against thinking so.

She added that previous experiences of introducing easements when the indicators showed the country had reached a "green zone" had led to a resurge in cases. This could happen again if the authorities eased up on the measures, said Dr. Sheena.

"The point is, it is not safe yet. numbers are going down. That's a good sign. But it is not where we want it yet. So, please take some time with the HPA to fully control this." said Dr. Sheena.

The Maldives has so far confirmed 9,939 cases of COVID-19, since identifying the first case on March 7. 8,597 individuals have since made recoveries from the virus, while there are 1,301 active cases currently.