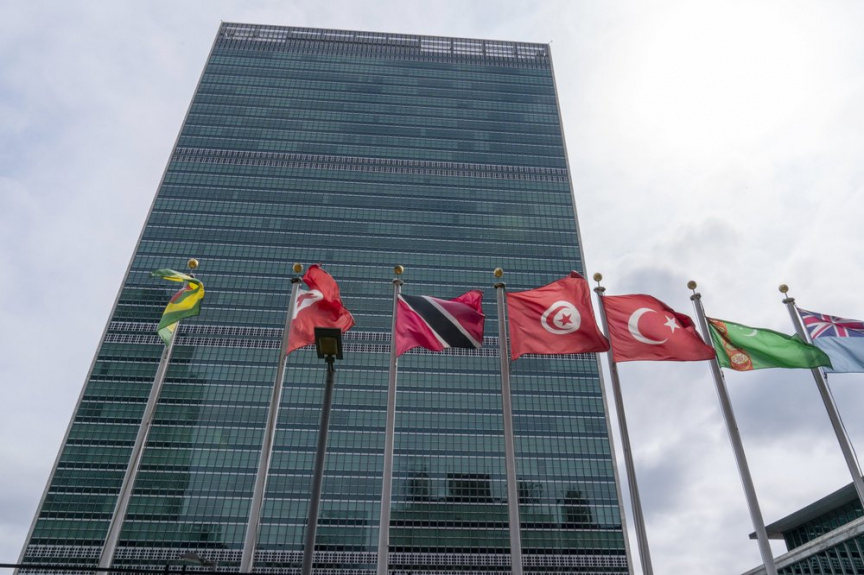 Member state flags fly outside the United Nations headquarters, Friday, Sept. 18, 2020, in New York. With the COVID-19 pandemic still circling the globe, world leaders are skipping their annual gathering in New York and will make pre-recorded speeches this week on the state of a deeply divided world turned topsy-turvy. (AP Photo/Mary Altaffer)

UNITED NATIONS (AP) — Born out of World War II’s devastation to save succeeding generations from the scourge of conflict, the United Nations officially marks its 75th anniversary Monday at an inflection point in history, navigating a polarized world as it faces a pandemic, regional conflicts, a shrinking economy and growing inequality.

Criticized for spewing out billions of words and achieving scant results on its primary mission of ensuring global peace, the U.N. nonetheless remains the one place that its 193 member nations can meet to talk.

And as frustrating as its lack of progress often is, especially when it comes to preventing and ending crises, there is also strong support for its power to bring not only nations but people of all ages from all walks of life, ethnicities and religions together to discuss critical issues like climate change.

Secretary-General Antonio Guterres, looking back on the U.N.’s history in an AP interview in June, said its biggest accomplishment so far is the long period during which the most powerful nations didn’t go to war and nuclear conflict was avoided. Its biggest failing, he said: its inability to prevent medium and small conflicts.

The United Nations marked its actual 75th anniversary — the signing of the U.N. Charter in San Francisco on June 26, 1945 by delegates from about 50 countries — on that date this year at an event scaled down because of the coronavirus pandemic.

Then, Guterres said people are continuing to lose trust in government and political establishments. He had warned about the rise of populism triggering increasing threats to multilateralism and called for multilateralism to be given “teeth.” He has often denounced what he calls a “groundswell of xenophobia, racism and intolerance.”

He also urged the inclusion of civil society, cities, the private sector and young people at top tables, saying they are “essential voices in shaping the world we want.”

Monday’s mainly virtual official commemoration will not be a celebration. It will include a declaration on the U.N.’s 75th anniversary, approved by diplomats from all U.N. member states after sometimes heated negotiations. Then, representatives from over 180 countries are expected to deliver pre-recorded speeches lasting three minutes.

The declaration recalls the U.N.’s successes and failures over more than seven decades and vows to build a post-pandemic world that is more equal, works together, and protects the planet.

“The urgency for all countries to come together, to fulfill the promise of the nations united, has rarely been greater,” it says, while praising the United Nations as the only global organization that “gives hope to so many people for a better world and can deliver the future we want.”

Even at times of great tension, it says, the U.N. promoted decolonization, freedom, development, human rights and equality for women and men, “and worked to eradicate disease.” And it “helped mitigate dozens of conflicts, saved hundreds of thousands of lives through humanitarian action and provided millions of children with the education that every child deserves.”

As for disappointments, the declaration says the world “is plagued by growing inequality, poverty, hunger, armed conflicts, terrorism, insecurity, climate change and pandemics.” It says the poorest and least developed countries are falling behind, decolonization is not complete, and people are forced to make dangerous journeys in search of refuge.

“It’s very unfortunate that it’s going to be a pretty gloomy celebration for the U.N,” said Richard Gowan, U.N. director for the Crisis Group, a Brussels-based think tank.

He said the declaration was weakened by U.S. opposition to strong language on climate change, and negotiations were delayed because the United Kingdom and others objected to China trying to insert language into the document, a reference to Beijing’s now hallmark phrase “win-win” which was not included.

“Although it was pretty minor, that captures the real question that has emerged over the U.N. in 2020, exacerbated by COVID, which is how is this organization going to navigate an era of U.S.-China tension,” Gowan said.

“There is a real sense that China has taken advantage of the Trump administration’s relative disengagement from the U.N. to increase its influence here,” he told a media briefing.

A year ago, Guterres warned global leaders attending the General Assembly’s high-level meeting of the looming risk of the world splitting in two, with the United States and China creating rival internets, currency, trade, financial rules “and their own zero-sum geopolitical and military strategies.”

Former Trump national security adviser John Bolton, a longtime U.N. critic who previously served as an ambassador here, said the United Nations did not meet expectations at the end of the Cold War in the early 1990s “that with Cold War gridlock removed, it would once again be effective.”

Bolton said President Donald Trump isn’t going to tackle the U.N. reforms that he would like to see if he wins a second term. “I think he doesn’t fully understand it, doesn’t care about it, like much of the world of foreign policy,” Bolton said.

If Democratic candidate Joe Biden wins, “they’ll want to do more through the U.N., but I don’t think they’ve thought it through either,” Bolton said. “So I think you’re at a period of uncertainty that’s going to last for some time.”

To mark its 75th anniversary, the United Nations launched “a global conversation” in January using surveys, polls, online and in-person gatherings to find out what all kinds of people were thinking about the future. The results, which secretary-general called “striking,” were released Monday.

According to the results, over one million people from all 193 U.N. member nations took part, including 50,000 people in 50 diverse countries who were part of a scientific poll.

Fabrizio Hochschild-Drummond, the secretary-general’s special adviser on the 75th anniversary commemoration, said it was striking that against the backdrop of polarization, disagreement and deadlock, respondents across all regions, ages and social groups “were remarkably united in their priorities for the future.”

Amid the COVID-19 crisis, he said, the immediate priority for respondents is access to affordable health care, safe water and sanitation and education, followed by greater international solidarity and increased support to those hardest-hit by the pandemic.

Over 87 % of respondents “believe global cooperation is vital to deal with today’s challenges,” Hochschild-Drummond said, and 74 percent said they believe the U.N. is essential in tackling the challenges the world faces.

Guterres said the 75th anniversary is an ideal time to realize these aims.

“We face our own 1945 moment,” he said. “We must meet that moment. We must show unity like never before to overcome today’s emergency, get the world moving and working and prospering again.”

'Wealthy nations must provide $100B in climate funding'

As leaders reconvene at UN, climate and COVID top list

'World is at `pivotal moment’ and must avert crises'