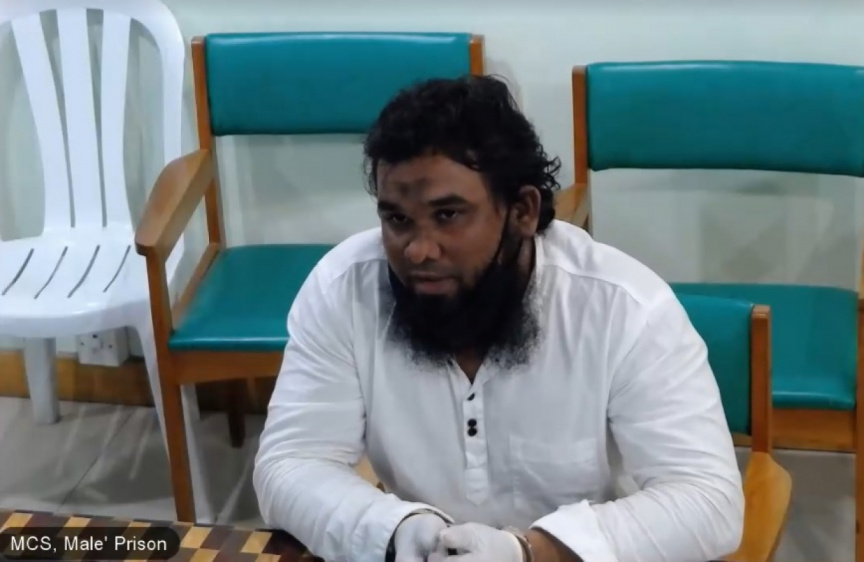 Ismail Asif, Beach House, R. Maduvvari, pictured during his arraignment at the Criminal Court on September 20, 2020.

Ismail Asif (Beach House, R. Maduvvari), the man charged with stabbing Ismail Hammad (Fehiali, R. Maduvvari) following a dispute while on board the fishing boat Jaree off the coast of A. A. Maalhos, and throwing him overboard, denied the charge during his arraignment at the Criminal Court.

During the investigation into the crime, which took place in November 2019, the police found that the dispute between Asif and Hammad originated from a difference of opinion regarding a religious matter. The dispute escalated into violence, and Asif attacked Hammad with a knife. He sustained multiple stab wounds in the attack.

There were three people on board the boat at the time; Asif, Hammad and a third unnamed man.

The police allege that after Hammad was stabbed and thrown overboard, he swam ashore to Maalhos, Asif and the third man on the boat went to Maalhos and attempted to capture him.

The state prosecution said that Asif was charged with assault using a sharp-edged weapon to cause grievous injury for attacking and injuring Hammad using a Kiwi brand six-inch knife on board Jaree on the night of November 22, 2019.

Meanwhile, the forensic evidence submitted by the state include a key DNA report to prove the DNA profile of the blood found on the boat matches with Hammad. The blood was found from multiple locations inside the boat.

“I cannot confess to this charge. It is clear, from the testimony itself, that this isn’t something I did. There’s nothing that can be proven from any testimony,” he said.

Asif said that he became aware there was blood on the boat when the third man switched on the lights. He said that it was why he went looking for Hammad, and questioned why he would go looking for him after causing him such grievous injury.

He said that Hammad had slipped and fallen overboard.

“I explained how this happened in my statement. I said that I noticed Ismail Hammad hadn’t been of sound mind. That I therefore believe he may have harmed himself. And I said that I ran inside the boat, out of fear he may injure me using a knife he had,” he said.

“And then Ismail Hammad slipped and fell into the water. And Ismail Hammad refused when I told him to climb back overboard and swam towards Maalhos.”

Asif said that it was possible that Hammad sustained injuries after falling on to rocks.

“After Ismail Hammad sustained such serious injuries at his own hands, it’s possible that he came by such serious harm after, for example, falling onto the rocks with the waves crashing in the seaward side of an island, and diving and swimming ashore,” he said.

Judge Ahmed Shakeel accepted Asif’s “not guilty” plea, and concluded the hearing after announcing that the next hearing will take place on September 27 to hear witness testimony.

The victim in the case, Hammad himself has been charged in connection to another crime – a case involving subjecting an underage girl to an illegal marriage and sexually violating her.