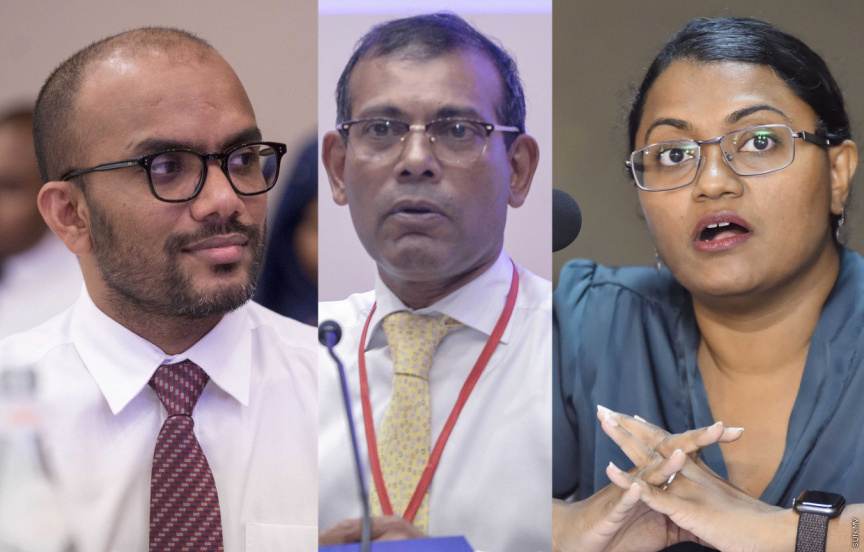 The single window project is designed to create an electronic platform that allows parties involved in trade and transport to lodge standard information and documents with a single entry point to fulfill all import and export related statutory requirements.

The invitation to tender was issued in April 2019. The contract was awarded to Webb Fontaine Inc. in Philippines in September 2019, and the contract agreement was signed in December 2019.

The Economic Ministry denied media reports that ADB has ordered a halt to the project irregularities in awarding the contract in a press conference on Monday evening.

The project was discussed on MDP’s WhatsApp national council group on Monday afternoon.

Sun has received screenshots of the conversation, the authenticity of which has been verified through multiple sources.

Nasheed said on the group that a complaint over the project was lodged with ACC before the contract was awarded, but that ACC had ignored the complaint and allowed the contract to be awarded.

ADB requested for the project to be halted last month, but the Economic Ministry is demanding that a new bidding process be carried out,” said Nasheed.

He then forwarded a message sent to him by someone, which stated that the contract was awarded to a Qatar-based company, but that the contractor was actually “an R&D outlet in Philippines”.  It says that the bids were evaluated by a team composed of officials from Economic Ministry and National Center for Information Technology (NCIT).

Nasheed alleged that officials from NCIT on the bid evaluation committee were in collusion with the contractor.

Economic Minister Fayyaz Ismail dismissed the allegations as “false”, while Finance Minister Ameer said that he had no prior knowledge the contractor was a Philippines company until it was reported on media.

He said that the Finance Ministry was not involved in the bid evaluation process, and that it was carried out independently.

“Issues with project evaluations and other such issues will continue to arise in the future. People may conduct the evaluation wrongly. Or with ill intentions. Certainly, such issues are looked into and taken action against now. The project will proceed with a new tender. And ADB was involved in the whole process,” said Ameer.

In response to Ameer, Nasheed said that that they were not children, and to stop being patronizing.

Ameer provided assurance that no systemic corruption has taken place in procurement processes carried out for government projects during the current administration, and that he will not allow for corruption within government companies either.

“Amid this internal rivalry, aren’t we calling each other thieves and destroying ourselves?” he asked.

“Ameer, I can’t be accused of stealing because [I] haven’t stolen. You aren’t called a [explicative] right?” responded Nasheed.

In response to this Ameer replied, “Speaker! I said that to explain how things are, not to finger point”.

Nasheed alleged that Ameer had allowed the project to proceed despite the alleged irregularities to accommodate Fayyaz’s wishes.

“Ameer, did you think you would grow powerful by siding with Faya? You are wrong,” said Nasheed.

Ameer said that Finance Ministry had ordered for the project to be suspended as soon as the oversight came to their attention, and repeatedly stressed that the evaluation process had been carried out with ADB’s involvement.

Nasheed continued to state that ADB had ordered for the project to be suspended, but that Finance Ministry had ignored the orders and proceeded with the project.

Ameer said that Nasheed was not in possession of correct information, and a statement will be issued clarifying the facts.

In a joint press conference by the Economic Ministry and Finance Ministry on Monday evening, Economic Ministry’s leading consultant for the single window project, Hussain Hameem said that Webb Fontaine was wrongfully awarded the project due to a technical oversight.

He said that the Economic Ministry brought the oversight to ADB’s immediate attention after it came to their notice, and conducted a review of the tendering process, which found the oversight had not been intentional.

Hameem said ADB has not sanctioned the Maldivian government, and has found that the oversight did not involve any integrity violation or anti-corruption policy violation.