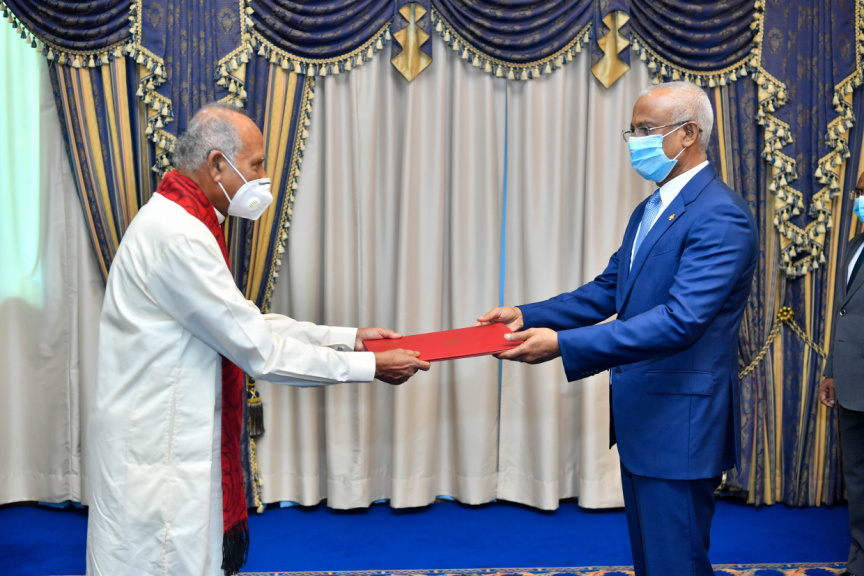 He presented his credentials to President Solih in a ceremony at the President’s Office on Monday afternoon, following which they discussed further strengthening the ties between Maldives and Sri Lanka.

President Solih said that the strong official bilateral ties between Maldives and Sri Lanka are matched by the close informal ties between the people of the two countries, developed over centuries.

He thanked the Sri Lankan government for its assistance to Maldives during the ongoing coronavirus pandemic, and especially the support extended to Maldivians who reside in Sri Lanka.

He said that Maldives and Sri Lanka share a special bond underlined by shared heritage, cultural exchange and mutual trust.

He expressed his commitment to further enhancing existing cooperation in the areas of education, health and culture.

Bedagge is a veteran Sri Lankan musician and actor. His contribution to the field of culture and entertainment spans decades.

The Sri Lankan press report he was among artists who supported Podujana Party, which is now the ruling party of Sri Lanka, during the presidential election in 2019.

He is not known to have served any government posts prior to his appointment as the new Sri Lankan High Commissioner to Maldives.