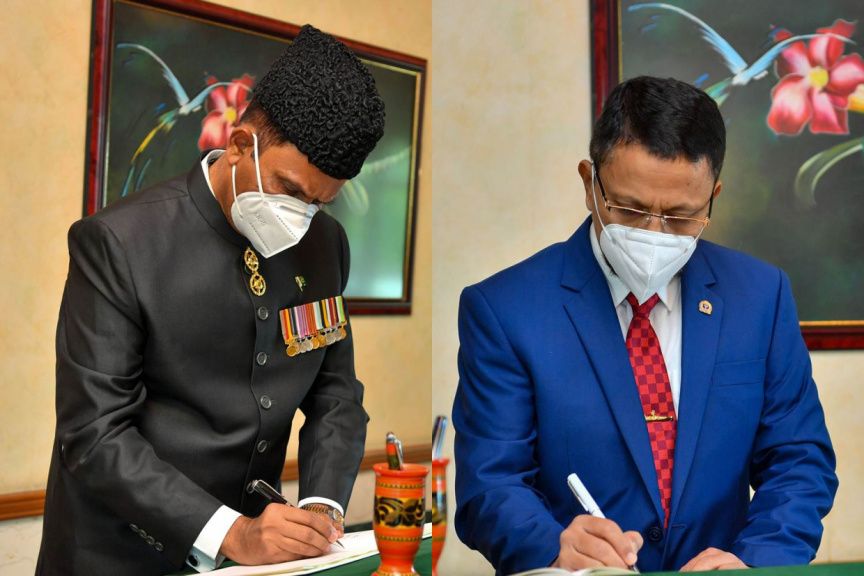 The new high commissioners of Pakistan and Bangladesh have presented their credentials to Maldivian President Ibrahim Mohamed Solih.

The new High Commissioner of Pakistan is Vice Admiral Ather Mukhtar (Retired). He had been serving the operations branch of the Pakistani navy since 1984, and last served in the position of Deputy Chief of Staff of Naval Staff.

Both presented their credentials in separate ceremonies held at the President’s Office on Monday afternoon.

President Solih spoke of his recent phone conversation with Pakistani Prime Minister Imran Khan, during which they discussed issues of mutual importance and their countries’ respective experiences regarding the ongoing coronavirus pandemic.

He relayed his best wishes to the Pakistani Prime Minister, and praised Pakistani government for their success in containing the disease.

He also conveyed his condolences to all those in Pakistan who continue to be affected by the heavy monsoon rains occurring in the country.

Ending the meeting, President Solih expressed his eagerness to work with the new Pakistani High Commissioner to further the partnership between the two countries.

He also expressed his gratitude to the Pakistani government for their past and ongoing assistance to Maldives, especially in the fields of youth development, health and education.

President Solih said Maldives and Bangladesh have always enjoyed excellent relations marked by similarities in culture and a common religion.

He thanked the Bangladeshi government for their continued assistance to Maldives’ socioeconomic development, and expressed his gratitude for the help they have provided the Maldives throughout the ongoing coronavirus pandemic, by providing food, medicine and equipment, and through sending medical personnel.

He also acknowledged the positive contributions of the many expatriates from Bangladesh working and residing in the Maldives, and thanked the Bangladeshi government for their ongoing assistance to Maldives' worker regularization and repatriation programs.

President Solih also thanked the Bangladeshi government for their efforts to ensure the well-being of Maldivians living in Bangladesh, despite the difficulties imposed by the ongoing coronavirus pandemic.

Both President Solih and High Commissioner Nazmul Hassan expressed their keenness to explore further avenues for cooperation, to strengthen the bilateral partnership between Maldives and Bangladesh.