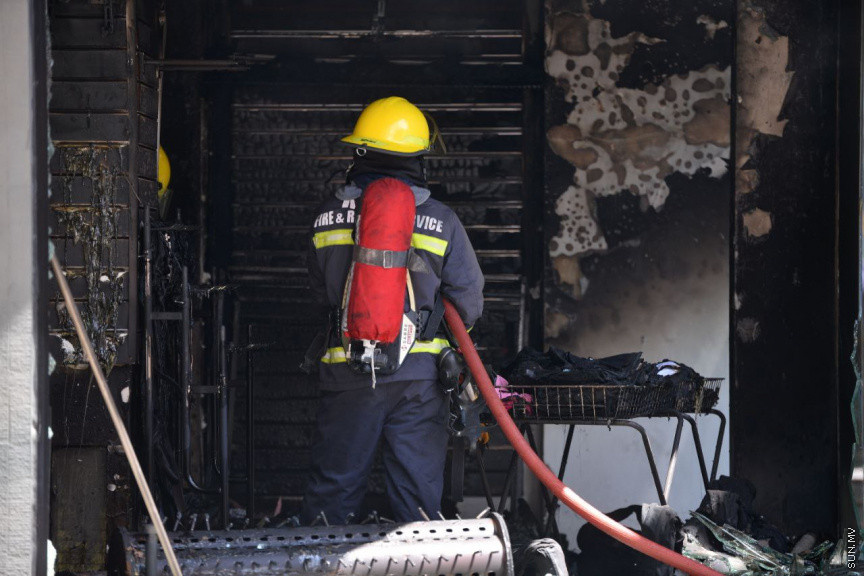 Firefighters working to douse flames in a fire incident that occurred in Male' City on August 30, 2020. (Sun Photo)

A fire that broke out in a shop in Male’ City today was due to an electrical shortage, Maldives National Defense Force has stated.

The fire that broke out in the “Vestire” shop in Janavaree Magu was extinguished at around 13:30 today.

Owner of the shop Hassan Zubair, speaking with Sun, said that the fire was due to an electrical shortage from an air condition unit.

“A passerby said that they saw clothes inside the shop on fire. It seems that an electrical shortage caused the fire.” Said Zubair.

He estimated that the fire caused damage worth around MVR 700,000. No one was injured in the incident.

An employee of the shop said that the fire broke out when the shop was closed during the prayer time. No one was inside the shop at the time.

Other buildings in the area were not affected much by the fire. The fire engulfed the entire Janavaree Magu in flames. A large group of people gathered in the area to spectate, despite repeated advisories by authorities against large public gatherings.

A fire that broke out in a café in Male’ City last Friday night had also caused a lot of damage. Damage totaling MVR five million was sustained due to the incident.

The cause of the fire has still not been disclosed by the authorities.