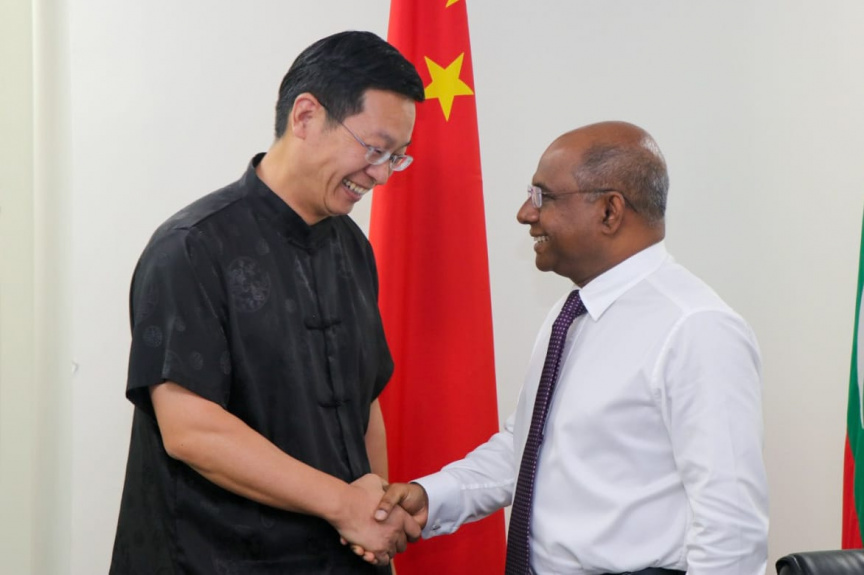 Shahid had showcased his language skills during virtual receptions held in friendly nations to celebrate Maldives 55th Independence Day, delivering his addresses in languages spoken in the nations in question.

The virtual reception in China was held earlier this Wednesday, and Shahid delivered his address in Chinese.

Ambassador Zhang tweeted a video of Shahid’s address, and expressed excitement that it was delivered in Chinese.

It is in Chinese！
AAAAA pic.twitter.com/cxtNRyTjEu

“I am thinking of issuing a certificate to Minister for excellence of self- learning capability,” he joked.

Shahid had delivered his address during the Independence Day reception held at the Maldivian embassy in United Arab Emirates (UAE) in Arab, and the reception in Thailand in Thai.

He also delivered his address during the reception held in Malaysia, which also took place this Wednesday, in Malay.

Shahid had spoken in Hindi during a reception held in Male’ to welcome the late Indian External Affairs Minister Sushma Swaraj last year.

He also has a habit of speaking to foreign diplomats and government officials in their mother tongue during his official visits, a tactic used by diplomats to signify closeness between nations.

Foreign Ministry has previously stated that Shahid will continue to deliver his addresses during similar functions in the languages spoken in host nations.

Shahid has met with high-level diplomats from more than 100 different nations since his appointment as Foreign Minister. He is also engaged in discussions with bilateral partners to secure assistance for Maldives to mitigate the impact of the COVID-19 pandemic.