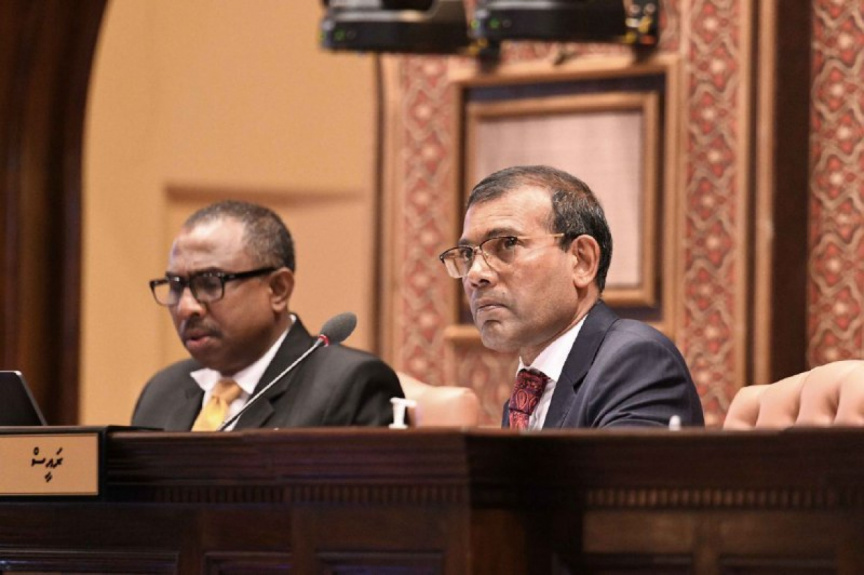 Parliament Speaker, former Maldivian President Mohamed Nasheed said on Wednesday that nations can achieve desired economic and social outcomes by developing nations in a manner which reduces carbon emissions, and leaves minimal impact on the environment.

In his address during the fifth Conference of Speakers of Parliament on Wednesday evening, Nasheed criticized development policies adopted by western nations.

Nasheed said that some nations continue to equate carbon emissions to development.

“The more fossil fuels they burn, the more carbon they emit, the richer they become. So they want to hold the right to emit as much carbon as possible. But this is a recipe for collective suicide,” he said.

Nasheed said that many western nations and green NGOs seem to think the way to stop climate change is to stop developing nations such as Maldives from emitting more carbon.

He said that statistics tell a different story.

Nasheed said that despite the statistics, many western nations continue to refuse to change their perspective, but that developing nations do not want to live off tiny amounts of electricity.

“So we proposed a different approach. For a start, let’s be very honest. Developing countries are going to install vast amounts of new electricity generating capacity over the coming decades. And we will do this, and I'm sure, they will do this regardless of whatever promise that they make on climate talks. But that doesn't mean we have to burn fossil fuel,” he said.

Nasheed proposed to all developing nations to develop economic plans that envisage lots of growth, but also envisage getting to net zero carbon emissions by 2050.

“We need economic and energy experts in each of our countries to develop zero carbon prosperity plans, to set our economic trajectories. These plans should be framed explicitly around developing countries achieving middle income status within 20 years,” he said “The models behind these plans must describe pathways for this growth to be delivered in a zero carbon manner. And they should be fully costed and explicit about investment needs.”

Nasheed called on parliaments to press governments to draw up the plans, and to commission the plans once they are drawn.

“So let’s get some honesty and some perspective on climate change. Let’s plan for the growth and prosperity we all want but that also delivers our climate goal. We can have the same economic outcomes through a different development path,” he said.

Nasheed said that nations can find a low carbon development strategy and still maintain the same economic outputs such as high employment and growth.

“Renewable energy now is cheaper in any given situation, anywhere in the world,” he said.