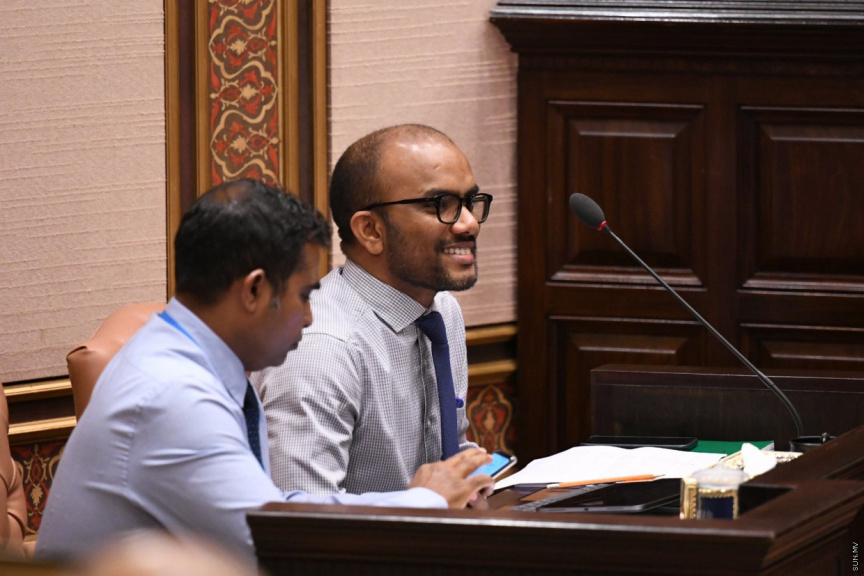 Finance Minister Ibrahim Ameer during the Ministerial Questioning period of the Parliamentary session on February 12, 2020. (Photo/Parliament)

Speaker of the Parliament Mohamed Nasheed has levied allegations of negligence against the former administration and the Finance Minister of the current administration Ibrahim Ameer in the handling of state debt.

Nasheed requested the advice and recommendations of MPs regarding the matter in today’s parliamentary session. The Speaker requested because of the lack of clarity in state debt between 2013 and 2018 and that the handling of debt is still not being carried out in accordance with the relevant laws.

Nasheed said that the parliament is to be informed of details regarding bonds, loans, and guarantees obtained by the state within a period of 30 days. Between 2013 and 2018, different Ministers in charge of finance had provided information to the parliament.

However, there were still contradictions in the statistics available from the Ministry and the information provided to the parliament.

“The amount of state debt is unclear. It is clearly stipulated in the Public Finance Act of 3/2006 and the Fiscal Responsibility Act of 7/2013 and the related regulations and policies, the management mechanisms for the obtainment of a loan, or the provision of a guarantee and its related affairs when a state debt comes into existence. However, I have noticed that the previous administration had not obeyed this and that the Ministry of Finance is still not following this.” Said Nasheed.

Some MPs that spoke on the matter called for a special audit to obtain the details of the loans obtained by the state. They also called for legal action against anyone that is negligible in the matter.

However, opposition MPs expressed anger for the proposal to obtain details of finances conducted in a specific time period.

“What I have presented is due to the lack of clarification of state debt. We need to be clear on what the state debt is. It is one issue. The second issue, is that the current Finance Minister is not managing he state debt.” Said Nasheed.