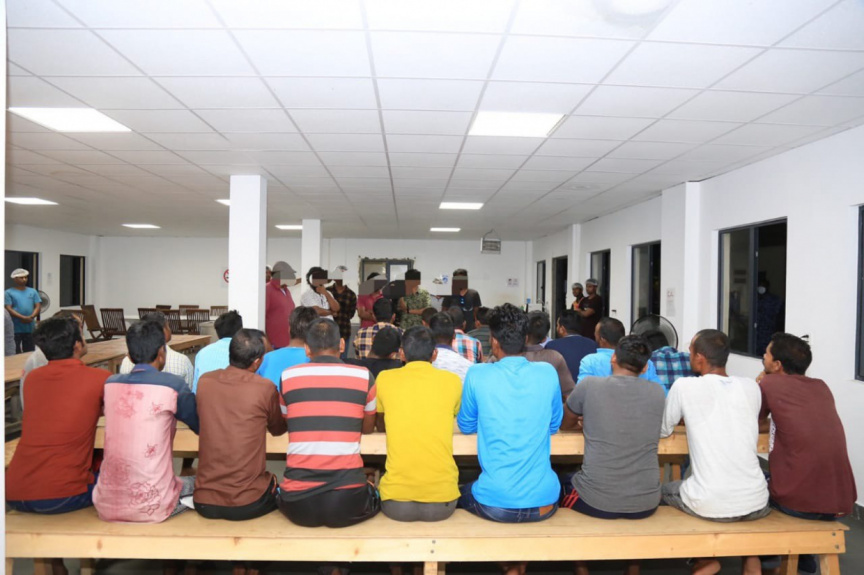 Migrant workers involved in a strike in an island in V. Atoll on July 20, 2020. (Photo/Maldives Police Service)

Maldives Police Service announced on Tuesday that 22 migrant workers have been arrested in response to the violent strike at an island under development as tourist resort in V. Atoll.

The police raided the island in question in response to reports of “obstruction of work and unrest” on Monday night. The police said that no one was injured in the incident, but that there were damages to the room of the site’s supervisor.

The police said in a statement on Tuesday that 22 migrant workers were arrested in connection to the case.

They were presented in front of the V. Felidhoo Magistrate Court on Tuesday, which ordered for them to be remanded in custody of the police in a detention facility determined by the Home Affairs Ministry for 15 days for the investigation.

The police have stated that the migrant workers on the island have initiated talks with their sponsor to resolve the conflict.

The arrest of the 22 migrant workers comes three days after the Criminal Court granted a 15-day extension to the remand of 19 migrant workers arrested for staging a violent strike at another island under development as a tourist resort, B. Bodufinolhu, earlier this July. The violent strike in Bodufinolhu was staged by disgruntled migrant workers over months of unpaid wages, during which they held local workers hostage, destroyed property and threw stone and iron bars at the first team of police officers who attempted to intervene, injuring some of the officer.

The incident in Bodufinolhu was followed by a protest staged by migrant workers in suburban Hulhumale’ in mid-July, also over months of unpaid wages, which turned violent, leaving several police officers injured and caused damage to police and private property.