Island Expert: A company of questions, in a ploy to escape the issue? 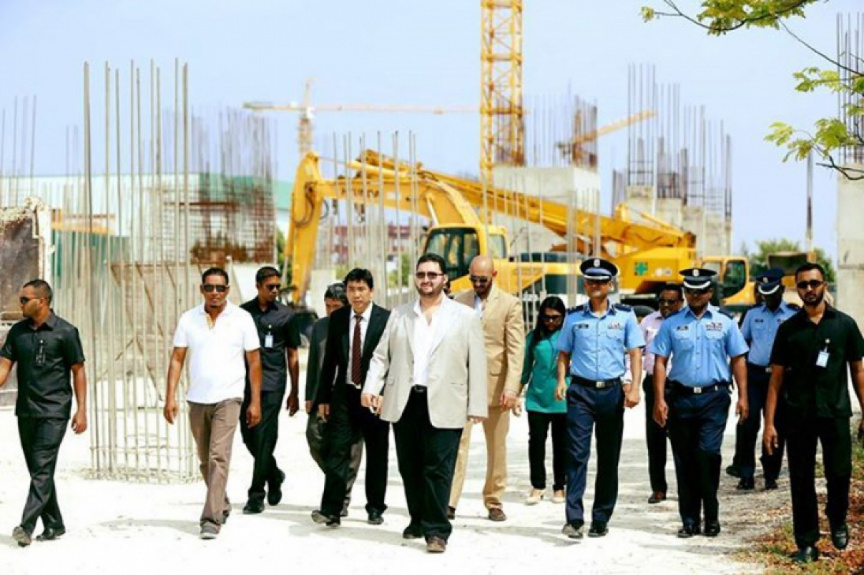 Prince Abdul Aziz bin Talal bin Abdul Aziz, during a visit to the Maldives in 2016, the prince visited the sites of the projects by Island Expert, accompanied by several senior police officials.

Things have escalated to a point where the expatriates of Island Expert have resorted to violence over unpaid wages. Expatriates squared off with police during the most recent protests, vandalizing vehicles and hurling projectiles at officers.

Managing Director of Island Expert, Anon Songpanya, during an interview with Sun, assured that the wages of the expatriate workers would be paid by the end of this month. He signified the payment as not a big deal.

The issue was that COVID-19 had capped off all sources of income for the company. The company was now working on raising funds to pay staffers by selling its assets.

Anon admitted that the company owed some MVR 13 million to its workers who were protesting.

However, the version of events from the expatriates was noticeably different.

“It has been eight months since they last paid us.” Said a participant of the protests held on July 6.

“Now that we don’t get paid, working here is useless. We can only go back (home) by getting violent. Aren’t they deported? When they are arrested?” said an expatriate of Island Expert who did not take part in the violent protests on July 13.

Some advocates of expatriate rights working in the Maldives allege that there are tactics used by companies to get out of paying the wages of employees in some situations.

The expatriates would be deported if they commit a crime, such as the violence on July 13, effectively lifting the burden on the company.

This is a tactic used to buy time, or not pay the wages at all if the company was lacking the funds.

Protests on July 13, that turned violent showed a frightening picture. Desperation taking over the expatriates, leading to charges at police who were outnumbered at first. The expatriates now wish to return home, one way or the other.

Despite this, Managing Director of Island Expert, Anon said that the MVR 13 million was not a massive fee for Island Expert since the company had been operating in the Maldives for more than ten years without obtaining a single loan.

“We have worked in the Maldives for ten years, completed projects worth more than MVR 100 million.” Said Anon.

The question that comes to mind now is that, how can a company this big reach a level where they are forced to sell of assets to pay wages?

“STO Managing Director Hussain Amru, and RCC Chairmen Retd. Col Nazim also provided financial assistance. When I get back to the Maldives, I can get help from many, selling off assets and arrange everything.” Said Anon when questioned by Sun over the MVR 1,600 paid to each worker after the July 6, protests.

Shares held by a Saudi Royal

Anon described Island Expert as a huge and powerful company.

Shares of the company are owned by a member of the Saudi Royal Family, Prince Abdul Aziz bin Talal bin Abdul Aziz.

Prince Talal is the grandson of the founder of modern Saudi Arabia King Abdul Aziz Al Saud and is heavily involved in philanthropy and humanitarian efforts. The prince also briefly served as the chair of the Transpacific Broadcasting Group.

During his visit to the Maldives in 2016, the prince visited the sites of the projects by Island Expert, accompanied by several senior police officials.

Fingers of skepticism have been pointed at the vaguely known relationship between the Saudi royal and Island Expert.

However, legally, the prince is not responsible for the conduct and finances of the company, but it goes a long way to show the power and wealth Island Expert has at its back. Only Anon, the Managing Director could be charged if the corporate veil is lifted. However, it begs the question, just how much of Prince Talal’s support does Island Expert have?

The next sticking point identified from Mr. Anon Songpanya, is that he is a shareholder of the Noomadi Resorts and Residences, a company that the government paid more than USD 55 million to terminate contracts.

The payment received harsh criticism from the majority of the public.

Anon, notably gave testimony against Noomadi in the arbitration process in the Netherlands. He even went as far as to pledge his share of any payments received from the arbitration to Noomadi, back to the Maldivian government.

He said that Noomadi would not face any detriment from terminating the contracts.

The issue was decided out of arbitration when the government paid Noomadi USD 55 million, which many see as a sting and a slap to the country due to the nature of Noomadi’s conduct and work on the contracts.

Island Expert has a total of 15 shareholders, including locals and foreigners. Despite this, only Anon and a local named Khadheeja Umeyla are on the board of directors, which again raises questions from the perspective of some business minds.

The next question is that why has it taken so long for island Expert to identify, admit, and address the issue of unpaid wages?

Expatriates said eight months, while the Managing Director said three months. No matter the duration, the wages have to be paid. However, it took violent protests by expatriates for the company to realize the gravity of the issue and work to address it.

It can be said that the company is a powerful one, a company that few know much about. The issue of unpaid wages may have taken so long to materialize due to these reasons.

The company has no hesitation in saying that it completed hundreds of millions of dollars of worth projects. Some projects are still underway.

Did the company really receive no income in 2020? Or is this a ploy, to escape from the responsibility of paying wages?