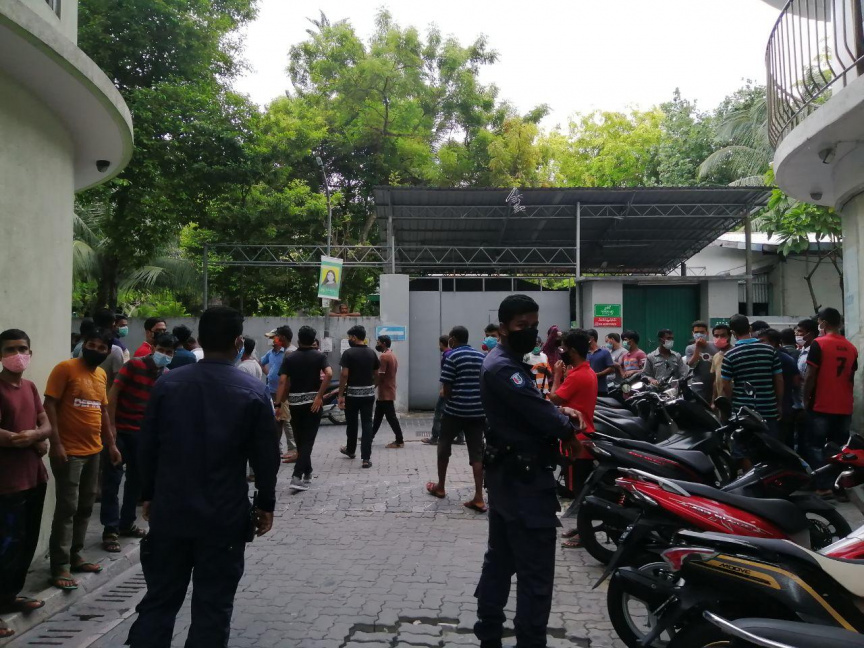 Expatriates have protested near the Bangladeshi High Commission in Male’ City.

The protests were sparked after the expatriates were denied from leaving the Maldives, according to the participants of the protest.

Police dispersed protesters after large groups of expatriates began gathering in the area. Around 50 expatriates gathered in the area and Special Operations police officers were dispatched to the location.  No use of force was noticed in dispersing the protesters and no one was arrested.

Some of the expatriates that spoke with Sun from the area said that the embassy was not facilitating their return back home. A list of individuals that wished to return were forwarded to the embassy which had not provided an adequate response.

“Last time we spoke, the High Commission said to [cut a leaf from a breadfruit tree and swim back]. Its been three months like this. We have no work here.” Said one of the individuals.

The man said that they had no source of income and were pleading with officials to help them return back home.

“We have no money for accommodation. We eat once and can’t get food the next time. We have received money from back home three times.” Said the individual.

He said that most of the individuals were undocumented and that their passports were in the possession of the agency that brought them to the Maldives.

Protests by expatriates have been increasing recently. Expatriates gathered in Artificial beach just last week. Protests in Hulhumale’ by expatriate workers also turned violent two days ago. 42 individuals were arrested during the protests. Expatriates in B. Bodufinolhu also protested at the beginning of this month leading to violence. A special police operation was conducted to quell the chaos.