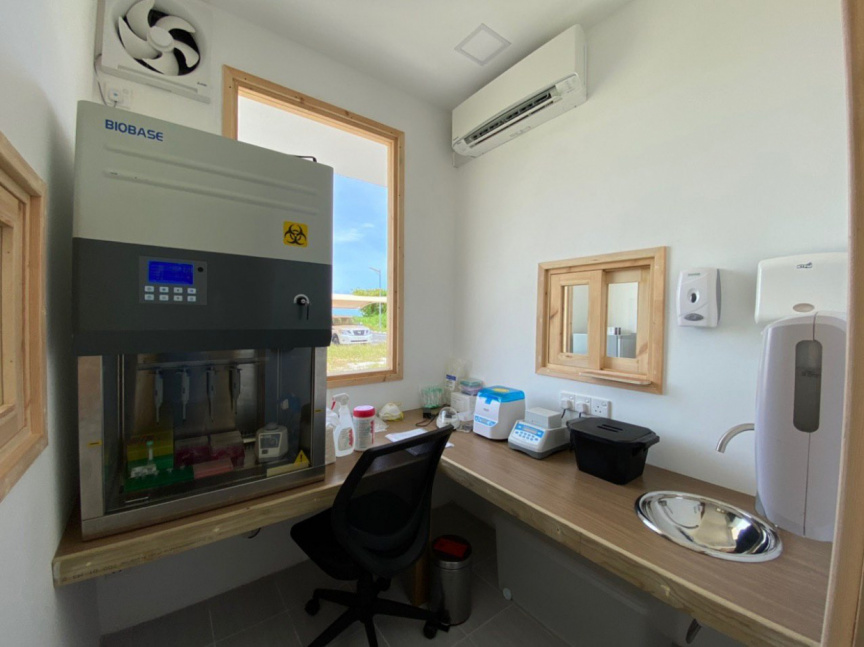 ADK Trade and Shipping announced on Monday it has completed work on the PCR laboratory developed at the international airport in N. Maafaru.

The laboratory was established to equip the Maafaru airport to conduct coronavirus tests on international tourists in preparation of the reopening of Maldives’ borders on July 15.

Work is also underway to establish a laboratory to run coronavirus tests at the airport.

The lab was funded by international resort chain Soneva Group, which operates a luxury tourist resort near Maafaru.

The project to develop the lab was contracted to ADK Trade and Shipping, which announced the completion of the project via its Twitter account on Monday evening.

“The new PCR lab at Maafaru International Airport is fully commissioned and ready for operation,” announced ADK Trade and Shipping in its tweet.

The company said it took them 30 days to complete the project; from ordering the medical equipment to establishing the physical infrastructure to the final set-up.

Island Aviation, the company which operates Maafaru airport, announced plans to build the PCR lab at a meeting with the Parliament’s State-owned Enterprises Committee on June 17.

Speaking at the meeting, Island Aviation’s Managing Director Mohamed Rizvi noted that Maafaru airport is surrounded by a number of luxury tourist resorts, and that the lab will be used to run coronavirus tests on international tourists who enter Maldives through the Maafaru Airport.

Rizvi said that he believes the lab, in addition to ensuring all tourists who come in through the airport are tested for the new coronavirus, will also serve as a promotional tool for the Maldivian tourism industry by bolstering confidence among tourists.

Maldives, an island nation heavily dependent on tourism as a source of income, suspended issuance of on-arrival visa and closed its borders to international travel on March 27. The Maldivian government has announced that tourists will not need to undergo quarantine or undergo coronavirus tests unless necessary when borders reopen next week.