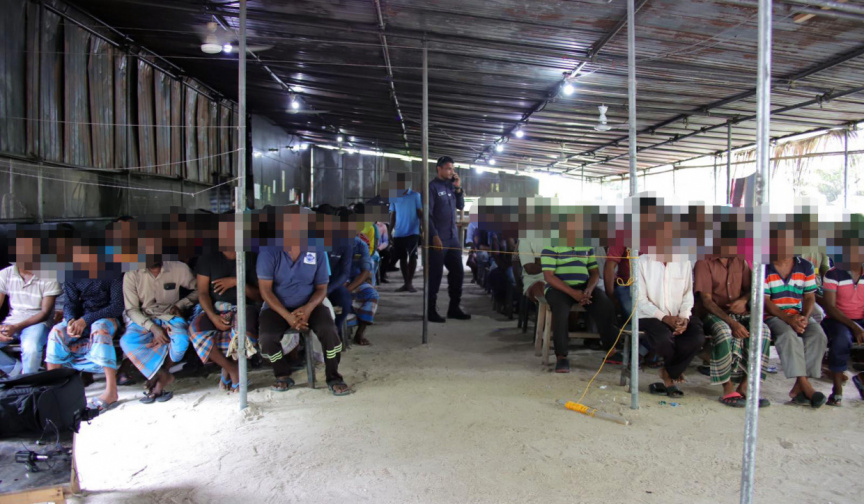 Transparency Maldives, on Monday, called on the Maldivian government to investigate the issues which led to the unrest at Bodufinolhu and to take legal action against those who violated the rights of migrant workers, stating that the unrest at the island was a consequence of the injustices suffered by many migrant workers in the country on a daily basis.

Bodufinolhu is an island in B. Atoll under development as a tourist resort. Migrant workers who work for the project’s contractor, RIX Maldives staged a violent strike at the island over months of unpaid wages on Thursday, during which they held local workers hostage and destroyed property. 19 migrant workers have been arrested in connection to the unrest.

The company’s Managing Director, Milandhoo MP Ali Riza has stated that the workers have not been paid their wages in four months. He said they were unable to pay the wages because they are owed payments by the resort’s developer Seal Maldives. Meanwhile, Seal Maldives has responded that they have issued payments to RIX Maldives which exceeds the contracted amount.

Transparency Maldives has issued a statement condemning the failure to pay the wages of the some 200 migrant workers.

The organization has called on the government to “investigate the issues that led to the arrest and take legal action against those who violated the rights of the migrant workers instead of re-victimizing them.”

The organization said that the migrant workers were threatened and intimidated when they asked for their wages, and that they held peaceful strikes asking for the payment of their wages starting 2019.

They said they consider the case to be a consequence of the lack of real opportunity for migrant workers to resolve their issues from within the systems in place in the country.

“This organization therefore calls on all relevant institutions not to pursue further punishment against the migrants who have been subject to neglect and inhumane conditions for so long, and to conduct a proper investigation into the violation of the rights of these 200 migrant workers in looking into this case,” said Transparency Maldives in their statement.

Transparency Maldives also called on the Human Rights Commission of Maldives (HRCM) and Labor Relations Authority (LRA) to ensure that the migrant workers arrested in connection to the case receive the rights they are entitled to under the Maldivian Constitution.

The organization said that authorities often focus on producing quick fixes instead of investigating long-standing issues such as human trafficking and acts of corruption linked to the cases.

“This organization therefore calls for an open national inquiry to investigate human trafficking and acts of corruption surrounding it,” said Transparency Maldives in their statement.

Transparency Maldives said the inquiry be conducted with the involvement of civil society and technical experts to identify systemic loopholes that facilitate trafficking of migrant workers, establish the role of institutions in addressing human trafficking and corruption, and revise, implement and monitor action plans to solve the issues.

The police have announced they have launched a criminal investigation into RIX Maldives for “exploitation and forced labor of migrant workers, facilitating human trafficking, failure to pay fees and payments entitled to the State on behalf of the migrant workers and violation of the rights of migrant workers”.