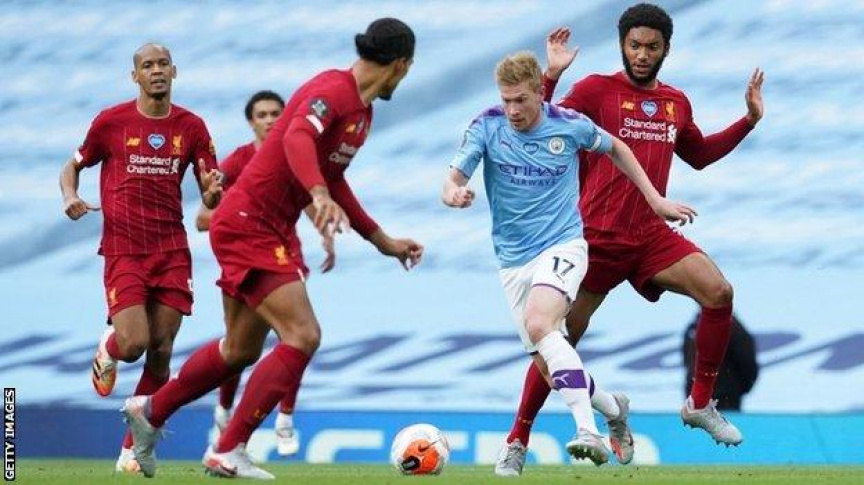 Jurgen Klopp's side ended an agonising 30-year wait for the top-flight title when City lost at Chelsea last week, but were resoundingly hammered on their return to action.

The Reds, who were given a guard of honour by the hosts before kick-off, could have taken the lead at Etihad Stadium but Mohamed Salah's low drive cannoned off the post.

It proved costly as Pep Guardiola's men took complete control with a devastating first-half display in which they scored three goals within 20 minutes.

The sublime Kevin de Bruyne converted the opener from the penalty spot after Joe Gomez hauled down Raheem Sterling and the England international finished off a swift counter-attack for the second.

Midfielder Phil Foden further enhanced his reputation as a star in the making, coolly slotting home before half-time following a quick one-two with De Bruyne.

City scored their fourth in the second half when Alex Oxlade-Chamberlain inadvertently slid the ball into his own net from Sterling's low drive.

'They didn't come here to celebrate'

After the game, Man City boss Pep Guardiola said: "I'm delighted. Congratulations to the team, we beat the champions with the quality they have.

"I saw in the guard of honour how incredibly focused they were, how they shouted. I saw their faces, that's why they're champions.

"They didn't come here to celebrate. They'd drunk enough beers and they came here to compete.

"So the chances we created, to beat them 4-0, it was so important for preparing against Arsenal and Real Madrid."

Liverpool boss Jurgen Klopp told Sky Sports: "Is the game important to us? I saw a brilliant attitude.

"They were quicker than us in mind. We lacked fluidity. Against Man City you have massive problems. We had moments. We had chances, we didn't use them. The result we have to take.

"If you want to lead this story in direction we were not focused, then do it. I liked my team's attitude. Isn't it nice another team can be champions when Man City can play so well?

"Man City are incredible. I saw their season, they didn't play a bad game."