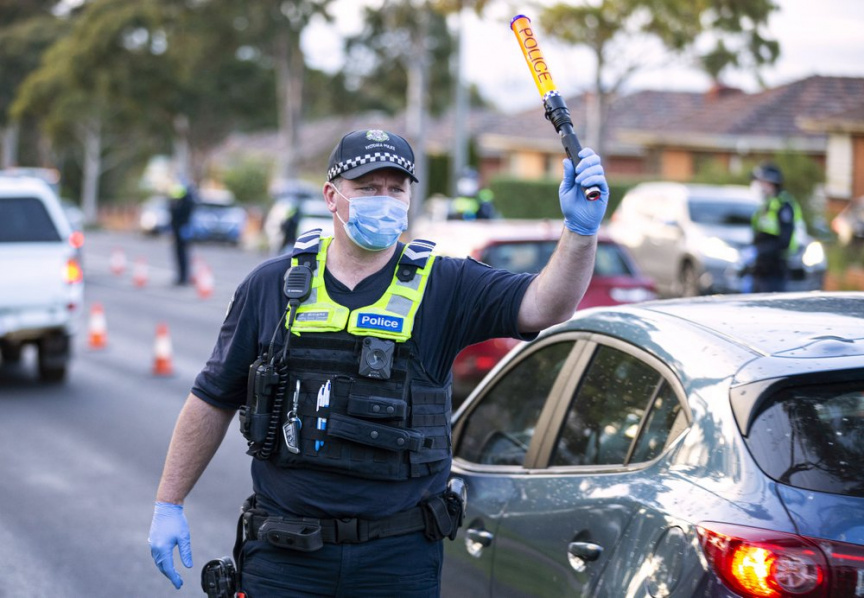 A coronavirus outbreak in Australia’s second-largest city continued to grow Thursday and the Northern Territory detected its first case in three months.

Northern Territory Health Minister Natasha Fyles said the man came home to Darwin on Monday from Melbourne before a one-month lockdown was imposed on 36 of its suburbs Wednesday night.

Before the man tested positive Wednesday, the Northern Territory had last detected a case on April 6.

Fyles said the man had spent two weeks in hotel quarantine in Melbourne on returning from overseas then spent “a couple of days“ with family in one of the city’s suburbs identified as a coronavirus hot spot.

Fyles did not say whether the man was likely infected in Melbourne or overseas.

Victorian state Chief Health Minister Brett Sutton said 77 cases had been detected in the past 24 hours in Melbourne, mostly in the locked-down suburbs.

A retired judge is holding an inquiry into breaches of infection control in Melbourne hotel quarantine, which has been blamed for some of the spread in the city while much of Australia is virus-free.

The Herald Sun newspaper reported allegations that security firms charged the state government for hotel guards that were not provided, guards had sex with quarantined hotels guests and allowed families to go between rooms to play cards.

In other developments around the Asia-Pacific region:

— India’s coronavirus caseload crossed 600,000 with 19,148 new cases reported in the past 24 hours and the curve on the rise. Nearly 100,000 cases came in the past four days as India’s tally reached 604,641 on Thursday. A total of 17,834 people have died, according to India’s health ministry. Maharashtra, Tamil Nadu and Delhi states account for more than 60% of cases. The western beach of state of Goa, a popular backpacking destination, opened for tourism on Thursday with the state government allowing 250 hotels to reopen after more than three months. Tourists must have COVID-19 negative certificates or get tested on arrival.

— South Korea reported 54 new cases as the virus continues to spread beyond the capital area and reach cities like Gwangju, which has shut schools and tightened social restrictions after dozens were found infected this week. Health Minster Park Neung-hoo during a virus meeting expressed alarm over the rise of infections in Gwangju, which had one of the smallest caseloads among major South Korean cities before this week. Park urged the city’s residents to refrain from unnecessary gatherings, maintain distance from others and wear masks.

— China reported three new cases of coronavirus, including just one case of local transmission in the capital Beijing, appearing to put the country where the virus was first detected late last year on course to eradicating it domestically, at least temporarily. The other two cases were brought from outside the country, according to the National Health Commission. China credits strict quarantine, social distancing and case tracing policies with reducing its cases. Masks are require for entry into many buildings, sometimes along with proof on a mobile phone app that the person is healthy.

— New Zealand’s health minister resigned following a series of personal blunders during the coronavirus pandemic. David Clark had earlier described himself as an “idiot” for breaking the nation’s lockdown measures and then last week appeared to blame a beloved health official for border lapses, generating an angry response from the public. Clark said he was becoming a distraction from the country’s virus response.