Police on safari rape case: Best way to prove case was by releasing the accused 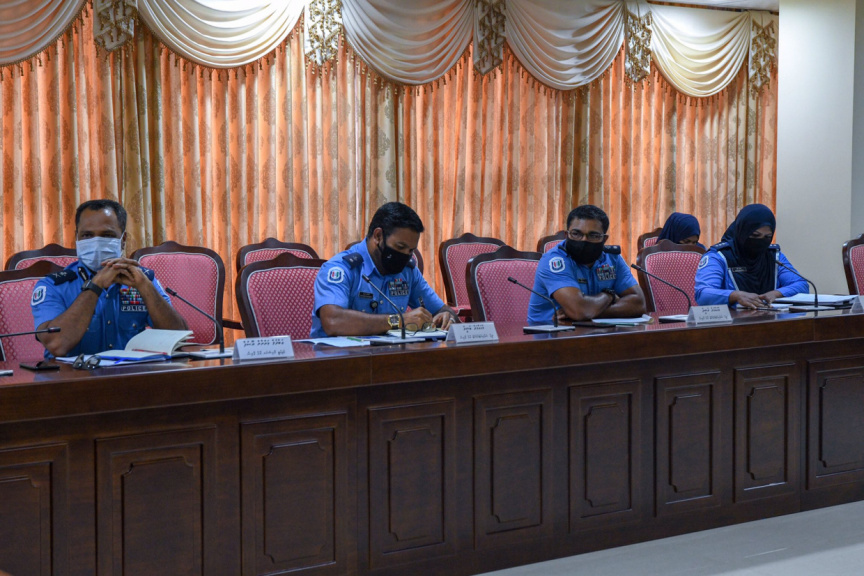 Senior officials of police speaking in the parliament's Committee on Gender and Human Rights on June 1, 2020. (Photo/Parliament)

Police have said that they acted in the manner that would be the best to resolve the case of safari rape reported last Friday when they released the two suspects involved in the case.

Two men aged 39 were arrested initially from the jetty area of Hulhumale’ but was later released due to no “apparent reason to keep them in custody.”

Public outrage has been observed regarding the matter which has even led to protests. Allegations are mounting that there was a political influence on the matter.

Senior officials of police were summoned to a meeting of the parliament’s Committee on Gender and Human Rights today.

Speaking in the Committee, the In-charge officer of the Hulhumale Police Station Mohamed Rasheed said that police acted accordingly with the matter and completed all necessary procedures.

The three were taken to the police station after completing all the necessary procedures.

Speaking in the meeting, Deputy Commissioner of Police Abdul Mannaan Yoosuf said that the case was lodged as a sexual assault case and had been treated as “any other sexual assault crime.”

The Deputy Commissioner said that the investigation was conducted accordingly with the Criminal Procedure Code.

Police actions regarding the case are being investigated by the Professional Standard Command (PSC), Human Rights Commission of the Maldives (HRCM) and National Integrity Commission (NIC).

Mannaan said that the outcome of the investigations would be respected, but maintained that police had acted correctly regarding the matter.

“I can say with certainty that the police acted accordingly with the procedure. We can view that in all aspects.” Said Mannaan.

Assurances of no interference or influence

Many have accused that the accused in the case were released by police due to the political and family ties of the accused.

“I am saying very clearly, no one, no one’s influence has led to a decision regarding the case.” Said Mannaan.

The actions of the officer who arrested the two individuals initially were based on the experience and training of the officer. The victim medical examination and statement regarding the matter were also collected based on the evidence and information presented to those involved, without any influence or fear, said the DCP.

The best way to prove was by releasing the accused!

Station In-Charge Rasheed said that the two were released because the police were focused on proving the case against them rather than keeping them in detention.

In any crime, rather than keeping the accused in detention, it was more beneficial for the police to release them and gain time to collect evidence to prove the case against them even if it took long.

“So, in light of the information received, we decided that it was best and would gain us time to complete the investigation and present it for trial rather than arresting them. In this case, we saw it as the best way to prove the case. It is also implemented in all other cases.” Said Rasheed.

Police also said that the safari on which the alleged rape had taken place was searched and even made requests to speak with everyone on the safari that night. However, when they refused to speak or provide a statement without a lawyer, their statements could not be collected.

Department head and Chief Inspector of police Mariyam Azma who is leading the investigation into the case, speaking in today’s meeting said that so far police had questioned the two accused, victim and the individual said to have provided the victim with alcohol, as well as the captain of the safari.

DCP Mannaan also said that there was a chance for more evidence to be obtained in the case. Investigation of the case would soon conclude and will be discussed with the Prosecutor General as well, according to the police.