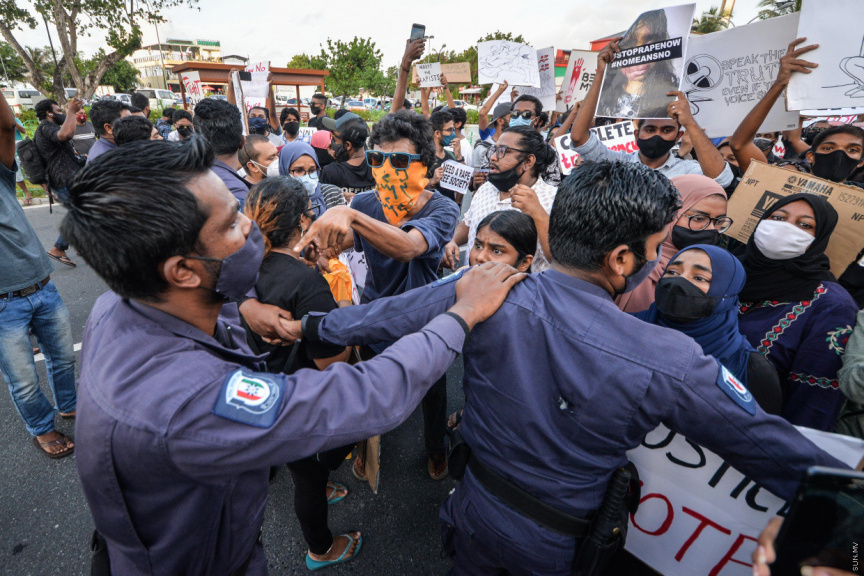 Police and protesters are photographed during an anti-rape rally held on June 29, 2020. (Sun Photo/Fayaz Moosa)

Police have arrested three in a protest in Male’ City today against rape.

The protest was held under the name “Against Rape and Impunity” over the case of a foreign woman who was allegedly raped on a safari last Friday. Protests sparked after police released the accused in the case after initially arresting them.

Police used pepper spray during the skirmishes in the protest.

Protesters headed towards an artificial beach in the east of Male’ City after starting out near Gender Ministry.

Police prevented the protesters from moving further as they neared the State Bank of India. This led to scuffles that saw some protesters breaking police lines.

A participant also kicked an officer, which led to police attempting to arrest the individual. The protests turned violent at this point.

Police used force to disperse the crowd. The individual arrested was placed inside a police vehicle from which the individual let himself out from the door on the other side of the vehicle.

Protesters then marched towards the President’s Office from Bodu Thakurufaanu Magu. Some protesters also positioned themselves at the main branch of the Bank of Maldives.

The protests once again turned violent when police tried to arrest the individual that had initially kicked the officer.

Police used pepper spray in trying to make the arrest. Journalists at the scene saw police take two individuals into custody and questioning them before searching the individuals,

Protesters called to end rape and sexual violence and attain justice for victims of such abuse without being influenced. They called to hold the relevant institutions responsible for their actions and also to reveal any undue influence.

Protesters even revealed instances of sexual abuse experienced. Many of those who spoke out at the protests, had experienced such abuse at a young age. They spoke with difficulty and some even had to stop due to the hardships.

What initially started out as a protest of just 50 people with masks and adhering to social distancing rules, later expanded into nearly 200 protesters. They also announced that protests would continue next Monday.

MP calls to classify victim blaming as a crime