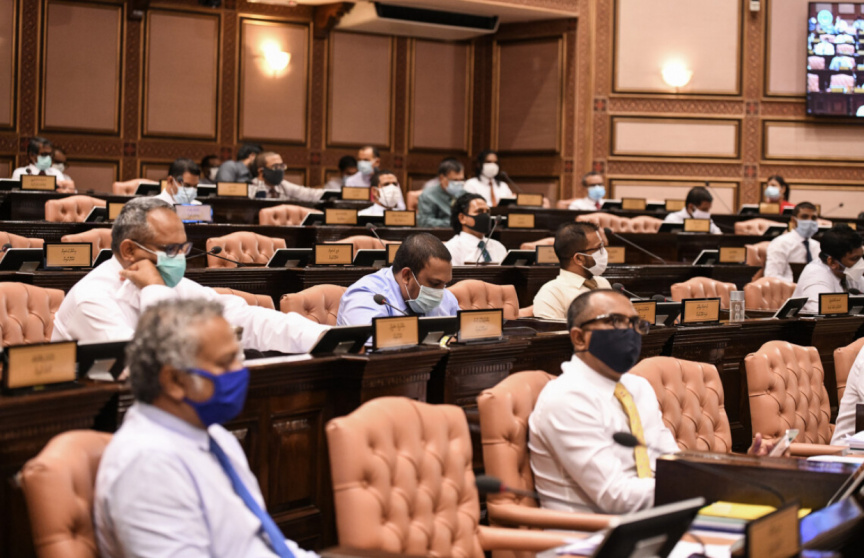 Parliamentarians wear masks to protect from the spread of the new coronavirus as they attend a sitting on May 29, 2020. (Photo/People's Majlis)

The Parliament, on Monday afternoon, passed an amendment to the Criminal Procedure Code to allow an extended 30-day window to lodge appeal petitions with higher courts in amid national emergencies.

The bill underwent major changes during the committee stage. The bill was submitted to declare the procedures for courts in amid natural disasters or amid a state of national emergency. It declares situations where courts may hold virtual hearings, and how the virtual hearings may be held.

It also allows 30 days, instead of the standard 10 days, to file appeal petitions.

The committee revised the bill to extend the time frame to file charges and issue verdicts in cases involving specific crimes. As such, the 30-day time frame for the charge of murder using a sharp-edged weapon has been extended to 60 days in emergency situations.

The Counter-Terrorism Act declares that that investigations against suspects arrested under the Act must be completed within 45 days after the suspects are presented in front of a judge for remand, and that charges must be filed within 15 days. The bill will allow 60 days for investigations and 45 days for filing charges in emergency situations.

The bill declares that exceptional circumstances where courts may hold virtual hearings must be declared on regulations formed under the Act, and that the Supreme Court must prepare the regulations within one month.