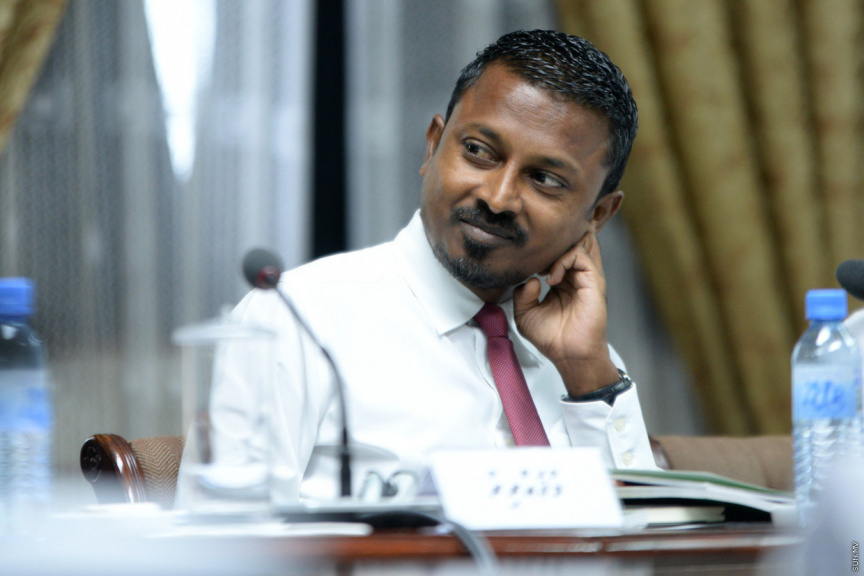 Vilimale’ lawmaker Ahmed Usham, on Wednesday, said the motion presented to the Parliament over a report on the illegal fuel trade run by STO Maldives Singapore Private Limited is a distortion of the facts.

The motion in question was presented by West Henveyru MP Mohamed Falah, who alleges that former President Dr. Mohamed Waheed Hassan Manik, after he came to power in 2012, covered up a report compiled by an international accounting firm hired to trace the missing funds believed to have been embezzled in the fuel trade run by STO Maldives Singapore Private Limited, a subsidiary of State Trading Organization (STO), during former President Maumoon Abdul Gayoom’s administration.

Presenting his motion, Falah alleged that Dr. Waheed purchased the report in question at great cost to the State and hid it. He said that government offices no longer had any documents pertaining to the report.

Usham, a former deputy attorney general, challenged the allegations. He said the motion was composed of nothing but make-believe stories, and that the State has documents which clearly show what had actually happened.

“Writing down imaginary stories doesn’t make it real,” he said.

Usham shared findings of an audit on the Attorney General’s Office in 2012.

The Maldivian government hired Grant Thornton UK LLP, part of the world's top organizations of independent audit, tax and advisory firms, to trace and facilitate the recovery of funds believed to have gone missing in the illegal fuel trade.

“I don’t know where this USD 10 million figure is coming from. The report says the firm’s lawyer sent a letter stating that the party wishes to terminate the agreements between the party and the Maldivian government citing non-payment of invoices, to settle the unpaid invoices within a specific period of time, and that the party will lodge a case in the UK courts in accordance with the agreement if the government fails to respond to a letter of claim sent on September 28, 2012,” he said.

He said that the Attorney General’s Office settled the payment for all invoices which were submitted, except for the money the UK accounting firm and the Singapore law firm claimed was owed to them for the termination of the agreements, held mediations to resolve the financial dispute between the firms and the Maldivian government and terminate the agreements from March 25 to March 26, 2013, and signed the settlement agreement on March 26.

“It says that part of the settlement money to the accounting firm as agreed during mediation had been settled. This is what happened, honorable speaker,” said Usham.

GRANT THORNTON DID NOT PREPARE A FINAL REPORT

Usham said that Grant Thornton had yet to prepare a final report when the agreement had been terminated in 2013.

“One of the questions asked of Grant Thornton during mediation was where there final report is. They said they had yet to prepare a final report,” he said.

But the firm said they had made a presentation to the government in 2011.

“The Attorney General’s Office then asked for a copy of the presentation. They did not answer to that question, to my knowledge,” he said.

Usham said the settlement agreement stipulated that Grant Thornton must share all its files on the case with the government once the once the money owed to them was paid in full.

Usham said the firm shared the files with the Attorney General’s Office, and that he personally saw the files.

FILES HANDED OVER TO ACC

Usham said that the files handed over by Grant Thornton were handed over to the Anti-Corruption Commission (ACC) under his watch in 2013.

“Because investigation of corruption cases falls within ACC’s purview, all the files were handed over to ACC untouched, without unsealing them,” he said.

Usham said both the Attorney General’s Office and ACC had papers documenting the exchange.

“Therefore, it is not some cover-up. What happened is clear even to this day, if you look at the documents at the aforementioned State institutions,” he said.

He said that while Falah’s motion distorts the facts, he said he also believes the illegal fuel trade case needs to be resolved, and called for the matter to be looked into, as called on by Falah in his motion.

Usham said he was confident an inquiry by relevant parliamentary committees will reveal the case had not taken place as portrayed in the motion.

Grant Thornton was hired to recover an estimated USD 800 million in missing funds during the administration of former President Mohamed Nasheed, who now serves as the Parliament’s Speaker.

Speaking at the parliamentary sitting on Wednesday, Nasheed said his administration had fallen the same day it had been scheduled to release Grant Thornton’s report.

However, according to Usham, a final report on the case was never prepared.