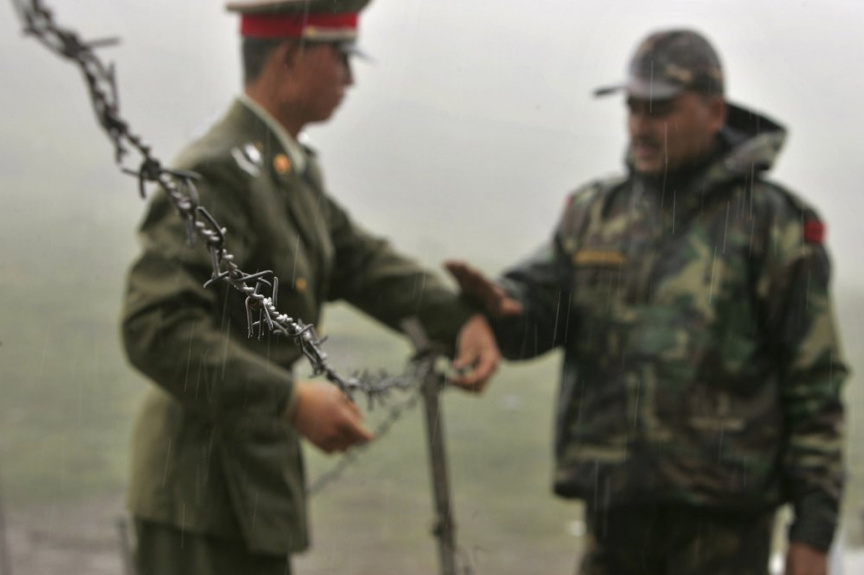 In this July 5, 2006 file photo, a Chinese soldier, left, and an Indian soldier put into place a barbed wire fence removed temporarily for Chinese officials to cross back to their country after a meeting with their Indian counterparts at the international border at Nathula Pass, in northeastern Indian state of Sikkim. (AP Photo/Gurinder Osan, File)

BEIJING (AP) — Chinese and Indian military commanders have agreed to disengage their forces in a disputed area of the Himalayas following a clash that left at least 20 soldiers dead, both countries said Tuesday.

The commanders reached the agreement Monday in their first meeting since the June 15 confrontation, the countries said.

The confrontation in the Galwan Valley, part of the disputed Ladakh region along the Himalayan frontier, was the deadliest between the two countries in 45 years.

Chinese foreign ministry spokesperson Zhao Lijian said “the two sides had a frank and in-depth exchange of views on the prominent issues in the current border control and agreed to take necessary measures to cool down the situation.”

The Indian army said in a statement that “commander-level talks ... were held at Moldo in (a) cordial, positive and constructive atmosphere. There was mutual consensus to disengage.”

Zhao denied apparent speculation by an Indian government minister that 40 Chinese troops had died in the June 15 clash.

“I can tell you responsibly that it is false information,” he said at a daily briefing.

India has said that 20 of its soldiers died. China has not released any information on casualties on its side.

Soldiers brawled with clubs, rocks and their fists in the thin air at 4,270 meters (14,000 feet) above sea level, but no shots were fired, Indian officials have said. The soldiers carry firearms but are not allowed to use them under a previous agreement in the border dispute.

Indian security officials have said the fatalities were caused by severe injuries and exposure to subfreezing temperatures.

The valley falls within a remote stretch of the 3,380-kilometer (2,100-mile) Line of Actual Control — the border established following a war between India and China in 1962 that resulted in an uneasy truce.

China says its not holding Indian soldiers in Himalayas