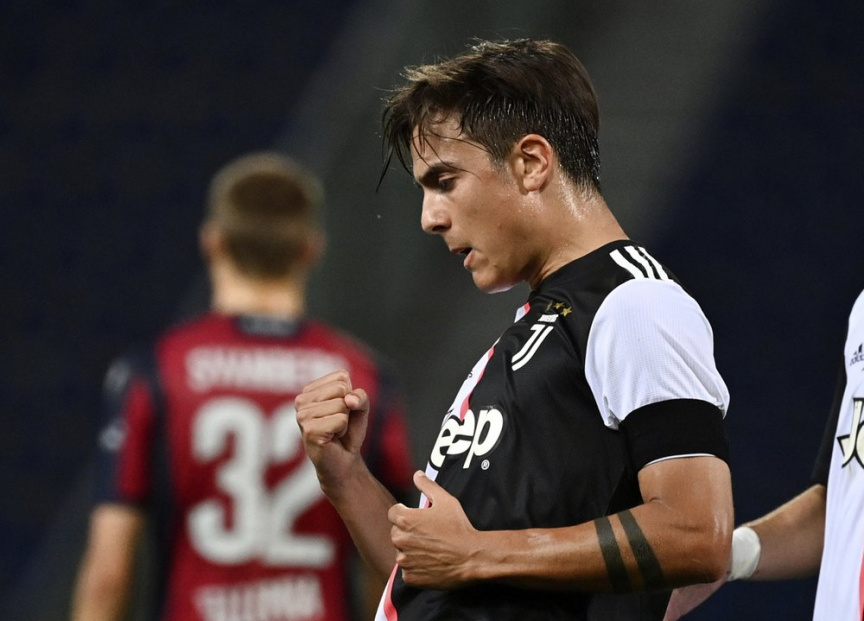 ROME (AP) — Paulo Dybala remains as dangerous as ever despite nearly 50 days with the coronavirus.

Cristiano Ronaldo had already given Juventus an early advantage by converting a penalty when Dybala doubled the lead with a splendid, curving effort in a 2-0 win at Bologna in the Serie A restart for both clubs on Monday.

It was a welcome complete performance for Juventus after being held scoreless over two Italian Cup matches and losing the final to Napoli last week — when Dybala’s saved kick in the penalty shootout proved key.

“It was essential to win,” Juventus defender Leonardo Bonucci said. “It was tough to restart after so long. Those two matches were underwhelming. This is the right path. We need to have the desire to bring home the result at any cost.”

Dybala was isolated for 46 days starting in March when he continued to test positive for the virus week after week -- even though he was reportedly without symptoms. Dybala’s girlfriend also tested positive.

“To tell you the truth, I didn’t really feel that great today,” Dybala said. “But I’m happy that I played a great match. During the time when I was idle I tried to stay in form by eating nutritiously.”

Matthijs de Ligt earned the penalty that Ronaldo converted then also started the play that led to Dybala’s goal, which was set up by a backheel pass from Federico Bernardeschi.

From just beyond the area, Dybala bent in a left-footed shot inside the left post.

After the break, Bernardeschi hit the post from the edge of the area and Ronaldo was unable to finish on the follow up.

Dybala also had another chance with his right foot but just missed the target.

AC Milan had no problem producing goals without the injured Zlatan Ibrahimović in beating relegation-threatened Lecce 4-1.

Samu Castillejo, Giacomo Bonaventura, Ante Rebić and Rafael Leão scored for the Rossoneri, who were eliminated by Juventus in the Italian Cup semifinals following a scoreless draw 10 days ago.

The victory boosted Milan’s chances of qualifying for Europe, moving level on points with sixth-placed Napoli, which visits Hellas Verona on Tuesday.

Lecce captain Marco Mancosu equalized temporarily by converting a penalty early in the second half but Bonaventura and Rebić quickly restored the visitors’ advantage in a span of three goals in four minutes.

Ibrahimović, who injured his calf in training last month, is expected back soon. But his contract, which expires at the end of the season, is a source of debate.

Before kickoff, Milan director of football Frederic Massara said “there will always be space for champions like (Ibrahimović)” but then added the club “needs to contain costs” amid the coronavirus pandemic.

Last-place Brescia drew at 10-man Fiorentina 1-1 without captain Mario Balotelli, who did not travel for the game amid a dispute with the club.

Alfredo Donnarumma converted a first-half penalty for Brescia and Fiorentina captain Germán Pezzella equalized with a diving header before Martín Cáceres picked up his second yellow card for the Viola.

Franck Ribéry played for Fiorentina for the first time since Nov. 3 following an injury layoff.

All of the games are being played in empty stadiums.