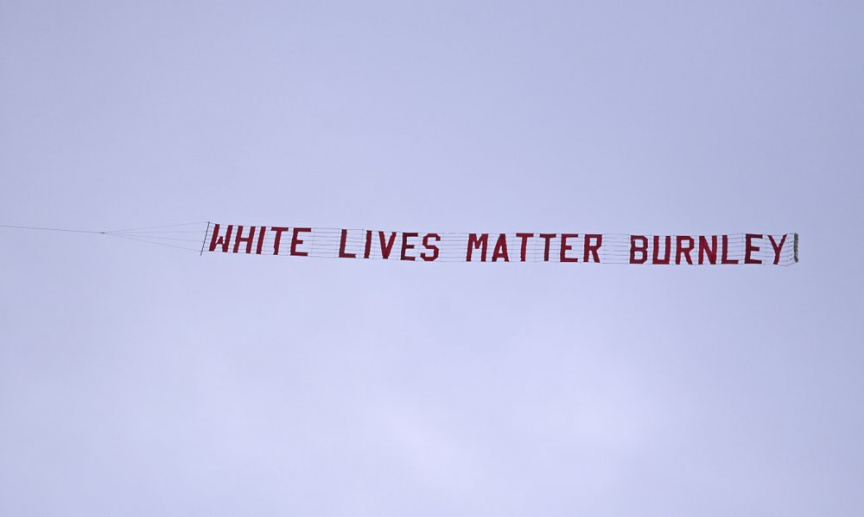 A plane towing a banner reading White Lives Matter Burnley flies above the stadium during the during the English Premier League soccer match between Manchester City and Burnley at Etihad Stadium, in Manchester, England, Monday, June 22, 2020. (AP Photo/Shaun Botterill,Pool)

MANCHESTER, England (AP) — As the players of Manchester City and Burnley took a knee inside an empty Etihad Stadium in support of the Black Lives Matter movement, the sound of an aircraft could be heard overhead.

It had a very different message.

“White Lives Matter Burnley” read a banner being pulled by the small plane that circled the ground for several minutes on a clear Monday evening in the east of Manchester.

Ben Mee, the captain of Burnley, couldn’t help but notice. He and his teammates had heard rumors just before they walked out for the match that such a stunt had been planned.

The club had even tried to prevent the plane from taking off.

“I’m ashamed and embarrassed,” said Mee, who added that the incident “definitely had a massive impact on us” as the Burnley went on to a 5-0 defeat.

Condemnation was quick to arrive, firstly on social media and then from Burnley in a statement issued at halftime in which the club strongly condemned what it deemed an “offensive banner.”

“This, in no way, represents what Burnley Football Club stands for,” the statement read, “and we will work fully with the authorities to identify those responsible and issue lifetime bans.”

“We apologize unreservedly,” Burnley said, “to the Premier League, to Manchester City and to all those helping to promote Black Lives Matter.”

When the Premier League season resumed last week, “Black Lives Matter” replaced player names on the backs of shirts for the first 12 matches in support of a movement that has gained popularity worldwide since the killing of George Floyd in the United States last month.

Players, coaches and match officials have taken a knee for around 10 seconds before kickoff in the dozen matches.

“A group of lads in there are embarrassed to see that,” Mee said his squad. “It’s not what we are about at all, and it’s missed the point of the whole thing, what we’re trying to achieve, to do.

“These people need to come into the 21st century and educate themselves.”

It was not immediately clear who arranged the aircraft and banner.

The incident overshadowed another impressive performance for City after the team’s 3-0 victory over Arsenal last week.

There was a big concern for City manager Pep Guardiola, however, with Sergio Agüero hobbling off with a right knee injury just before halftime.

“It doesn’t look good,” Guardiola said. “We will see tomorrow. He felt something in his knee. He was struggling in the last month about some pain in his knee.”

The Argentina striker already appeared in discomfort after having a shot blocked midway through the first half. Then, seconds before halftime, Agüero was fouled by Mee in the area in stoppage time to earn a penalty.

Agüero stayed down, clutching his knee, and soon left the field. As he walked past Guardiola in the technical area, Agüero pointed to a region behind his right knee and the coach reacted by shaking his head.

Any lengthy absence would leave City with just one recognized striker, Gabriel Jesus, as the team looks to negotiate its way through a hectic schedule since the resumption of soccer after the coronavirus outbreak. City has eight more league games to play before July 26 and is also in the FA Cup, which resumes at the quarterfinal stage at the weekend.

Phil Foden and Riyad Mahrez both scored twice, with David Silva adding the other goal.

The victory for second-place City ensured Liverpool cannot clinch the league title against Crystal Palace at Anfield on Wednesday.

If Liverpool wins, the title could be sealed a day later if City loses at Chelsea.