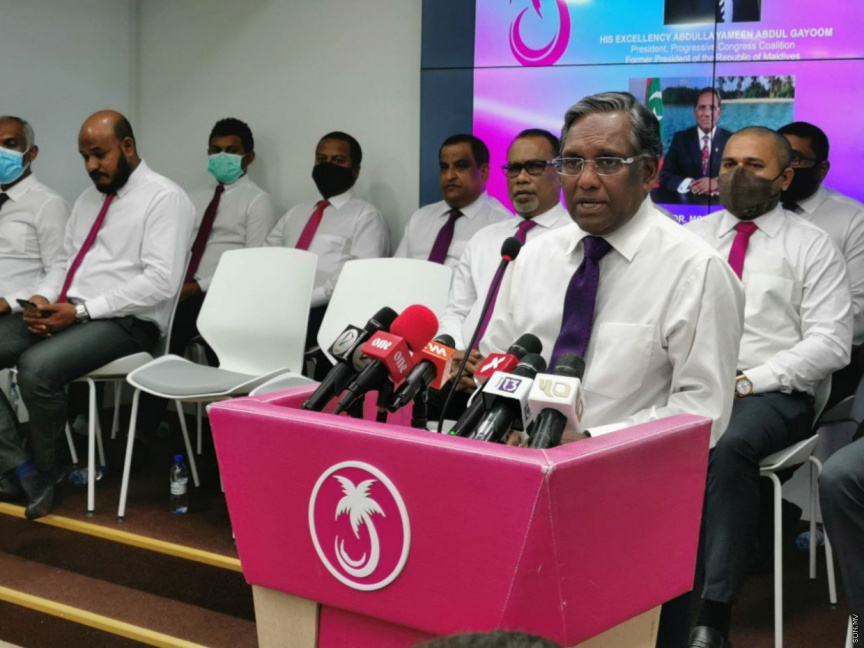 Former President of the Maldives Dr. Mohamed Waheed Hassan Manik has been appointed as the special advisory of PPM, the main opposition political party.

The news was announced by former MP for Fonadhoo and the current leader of PNC Abdul Raheem Abdulla in a press conference tonight.

"He (Dr. Waheed) came to the front line of the work to free former President Yameen, because he cannot accept the injustice being done to former President Yameen by this cruel administration, and because of his disapproval of the current direction the country is traveling in, as well as the fact that he wanted to prioritize the nation," said Abdul Raheem.

Dr. Waheed signed for PPM on December 25, 2013, after facing defeat in the Presidential election earlier that year.

Speaking in tonight's presser, Dr. Waheed said that the country was in a delicate situation and that the public were in a dire situation.

He said that he was 'witnessing the state finances disappearing without a trace'. The former President pointed to the payments made to companies as compensation by the state. He accused the government of 'distributing shares' before noting the increase in domestic violence in the country. Dr. Waheed expressed concern at all of the factors above.

Dr. Waheed said that he had a huge vision in how to run the activities of PPM/PNC and wanted to maintain its close relationship with the public.

Speaking about COVID-19 and the situation in the Maldives, Dr. Waheed called on politicians to refrain from expressing their personal passions and political agenda due to the difficult times ahead. He said that the situation was the worst to be faced after the Second World War.

"This is not the time to express enmity towards each other. This is the time for unity and working collectively. In such a situation, people appointed to positions of power and political positions by the public should prioritize the interest of the public." said Dr. Waheed.

Dr. Waheed served as interim president of the Maldives after the political unrest that occurred in the nation during 2012 that saw Mohamed Nasheed resign from power. Dr. Waheed who was the Vice-President rose the President.

Dr. Waheed was also recently embroiled in a row with MDP after an activist of the party publicly harassed him and his spouse.

He stressed that his return to politics was not for any personal gain and wanted to merely serve the public with every given opportunity.