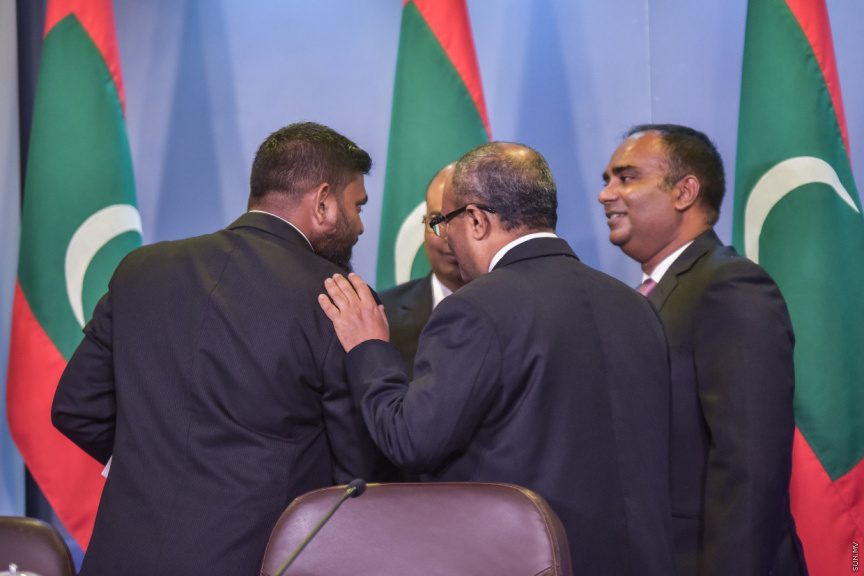 Members of Disappearances and Deaths Commission converse among themselves after a press conference. (File Photo/Sun/Fayaz Moosa)

Disappearances and Deaths Commission (DDCom), on Monday, denied remarks by Parliament Speaker, former Mohamed Nasheed, that the commission wrote a letter to the Parliament saying they were unable to uncover further evidence into their cases, and were therefore unable to proceed with their investigations.

Speaking at the parliamentary sitting on Monday morning, Nasheed said the DDCom had sent a letter saying they were unable to proceed with their work, but that he needed the commission’s report to gain a further understanding of the reasons for DDCom’s statement.

DDCom issued a statement refuting the remarks on Monday afternoon.

DDCom said it had sent the letter to the Parliament in response to a query regarding the progress of the commission’s work.

“But we did not say we are unable to proceed with any of this commission’s investigations. We take this opportunity to inform that the work of this commission remains in progress without cease,” wrote DDCom in its statement.

Speaking at Monday’s parliamentary sitting, Nasheed said the DDCom wrote in the letter that the commission had cited the publication of its initial findings as the reason for the challenges in uncovering further evidence.

“I find this to be no short of a miracle. In the countries I know, there is no link between the establishment of national inquiry commissions and the release of their findings with running criminal investigations and pressing criminal charges,” said Nasheed.

He questioned why the findings on DDCom’s draft reports on the murders were insufficient to press charges.

Nasheed said that DDCom was focused only on pressing charges against “the people who did the stabbing”, but had failed to run sufficient investigations into the people who had planned, funded and covered up the murders.

The most high-profile murders under investigation by DDCom includes the murder of prominent politician and Islamic scholar Dr. Afrasheem Ali in 2012, the abduction and the murder of journalist Ahmed Rilwan Abdulla in 2014, and the murder of blogger and rights activist Yamin Rasheed in 2017.

DDCom’s investigations point to Mohamed Mazeed and Samith Mohamed, who have links with violent extremist groups, to be behind all three murders.