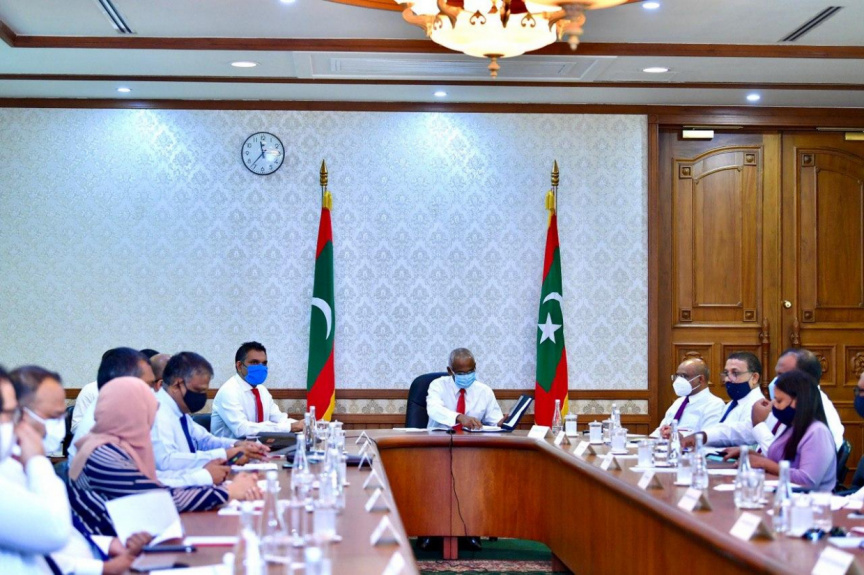 President Ibrahim Mohamed Solih, on Thursday, made several revisions to the ‘safe tourism’ guidelines drafted by Tourism Ministry in preparation of the reopening of Maldives’ borders for tourists next month.

The President made the decision following discussions at his second meeting with the National Taskforce on Resilience Building and Economic Recovery, held at the President’s Office this Thursday afternoon.

According to a statement released by the President’s Office, the President, prior to initiating the discussions, stated the government’s stand regarding the reopening of the country’s borders for tourists.

He then initiated discussions into some of the clauses of the guidelines, including the ones on the on-arrival procedures, the coronavirus testing process, isolation procedures, and procedures for transport in and out of resort islands.

Taskforce members also held in-depth discussions into measures ascertain the health and safety of the Maldivian people, tourists, and all the people who reside in Maldives as a whole, once the country reopens it borders.

“The President, during this meeting, decided to make revisions to some of the clauses under the advisement of taskforce members,” reads the statement issued by the President’s Office.

The office did not specify the clauses which were revised.

The National Taskforce on Resilience Building and Economic Recovery was established on April 13. The taskforce is charged with planning national efforts to assess and remedy the loss in income to businesses and individual citizens, along with its short-term and long-term social implications, due to economic slowdown as a result of the measures to curb the spread of the new coronavirus.

The taskforce is under the direct supervision of the President.

Maldives began relaxing its lockdown following a drop in daily infections in the end of May.

Maldives has 2,120 confirmed coronavirus cases, out of which 1,677 patients have recovered and eight have died from complications.

The recovery rate stands at 79.10 percent, and the active cases have dropped to 433.

While Tourism Ministry has announced plans to reopen the country’s borders to tourists in July, it has yet to announce a specific date.

The Tourism Ministry has also yet to release the final guidelines, but has announced that tourists will be issued on-arrival visa without any conditions, and will not be imposed additional fees and will not be required to undergo mandatory quarantine.

Govt. open for four days per week until end of June