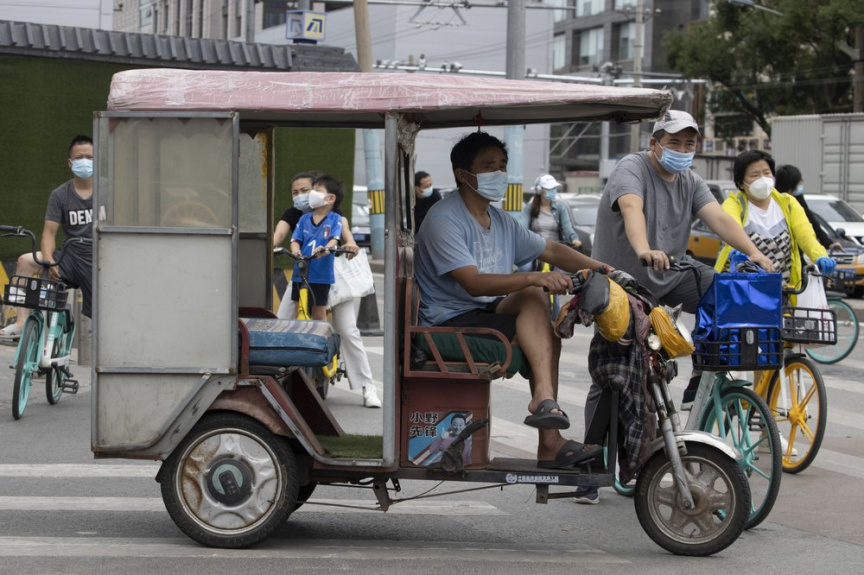 Residents wearing masks to curb the spread of the coronavirus wait at a traffic junction in Beijing on Wednesday, June 17, 2020. (AP Photo/Ng Han Guan)

Beijing reported 21 cases, down from 31 on Wednesday. The national total of 28 included four brought by Chinese travelers from outside the country and three in the city of Tianjin and Hebei province, both of which border Beijing.

No new deaths were reported, leaving the total number of fatalities at 4,634 amid 83,293 cases recorded since the virus was first detected in the central Chinese city of Wuhan late last year.

Just 265 people remain in treatment, with another 118 under observation in quarantine for being suspected of having the virus or after testing positive without showing any symptoms.

Beijing this week moved to suspend classes and restrict tourism and travel in and out of the city to stem any further spread in the latest outbreak traced to the city’s largest wholesale market.

Flights at the city’s two major airports have also been slashed by more than half, and the city’s top official says his administration is determined not to allow gains made in eradicating the virus to slip away because of further local transmissions.

Also, U.S. Secretary of State Mike Pompeo urged China to reveal all it knows about the coronavirus outbreak that is believed to have originated in the country. Pompeo with the ruling Chinese Communist Party’s top diplomat, Yang Jiechi, in Hawaii on Wednesday.

Pompeo “stressed the need for full transparency and information sharing to combat the ongoing COVID-19 pandemic and prevent future outbreaks,” the State Department said in a statement.

— India recorded its the highest one-day increase of 12,281 coronavirus cases, raising the total caseload to 366,946, but the government rules out reimposing a countrywide lockdown. India’s total deaths reached 12,237, a rise of 334 in the past 24 hours, according to a Health Ministry statement on Thursday. Prime Minister Narendra Modi rejecting a new lockdown, saying the country has to think about further unlocking and minimizing all possibilities of harm to people. The lockdown that was imposed nationwide on March 25 is now restricted to high-risk areas. When it was imposed, jobless laborers stranded in India’s big cities were left to walk great distances to their home villages, a migration that left them without food and risked spreading the virus further.

— South Korea reported 59 cases as infections continue to steadily rise in the greater capital area. The figures announced by South Korea’s Centers for Disease Control and Prevention on Thursday brought the national caseload to 12,257, including 280 deaths. It said 39 of the new cases came from Seoul and its metropolitan area, where health authorities have been scrambling to stem transmissions amid increased economic activity and eased attitudes on social distancing. Eight of the new cases were linked to international arrivals. Health officials have raised concern that the resurgence of the virus in China would also lead to an increase in imported cases. South Korea requires two-week quarantines of all passengers arriving from abroad.

— New Zealand reported one additional case, in a traveler who was quarantined after arriving from Pakistan. New Zealand appears to have eliminated community transmission of the virus but has confirmed three in recent arrivals. Also, New Zealand’s economy shrank by 1.6% during the first three months of the year, although that drop is likely to be dwarfed in the second quarter. Figures released by Statistics New Zealand capture the first week of the virus lockdown, which lasted more than two months. Nevertheless, the drop in GDP was the largest in 29 years and confirmed the nation is in a recession. The figures compare GDP in the first quarter with the preceding quarter. Under a different measure, which compares GDP in the first quarter with the same quarter in 2019, the economy shrank by 0.2%.

— Two universities in Australia’s capital plan plan to fly in 350 foreign students as Australia’s lucrative international education sector reopens after the pandemic lockdown. Australian National University and Canberra University expect the chartered aircraft to fly the students from Singapore in late July. The students would go into hotel quarantine on arrival and will likely be the first foreign students to return to Australian campuses. Tourism Minister Simon Birmingham says it’s “more likely” that Australia won’t allow general international travel before next year. International education has been Australia’s most lucrative export after mining.

— Hong Kong Disneyland on Thursday opened its doors to visitors for the first time in nearly five months, at a reduced capacity and with social distancing measures in place. The theme park closed temporarily at the end of January due to the coronavirus outbreak, and is the second Disney-themed park to re-open worldwide, after Shanghai Disneyland. Small groups of visitors had lined up before the park’s opening hours, and Mickey and Minnie Mouse characters drove by in a large taxicab and waved at the eager crowd waiting to enter.