Nasheed: Review would show incidents of 2012 was a coup 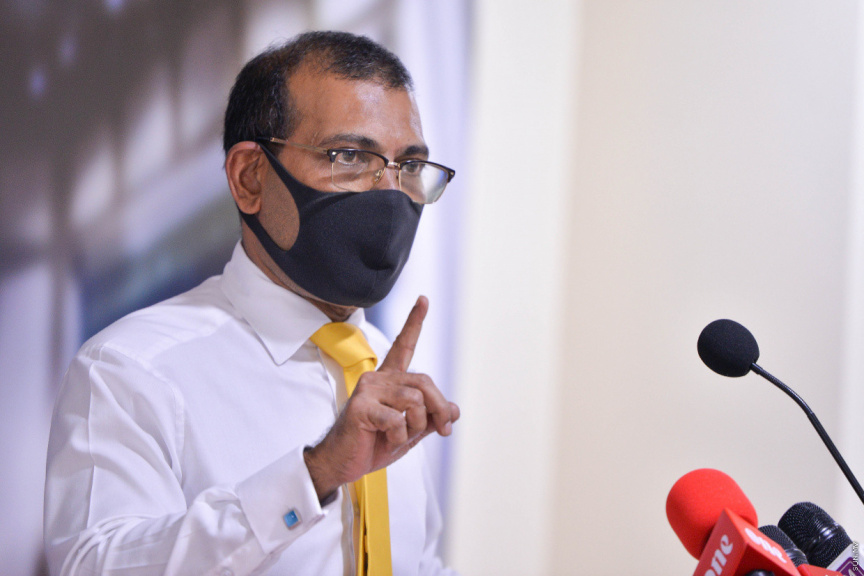 Speaker of the parliament Mohamed Nasheed during a press conference on June 15, 2020. (Sun Photo/Fayaz Moosa)

Speaker of the Maldivian Parliament Mohamed Nasheed has reiterated that the political unrest that occurred in 2012 which saw him resign from the presidency was a coup. The former President also said that a review of the incidents would show that it was indeed a coup.

Nasheed resigned from the presidency on February 7, 2012, after a series of demonstrations by the public due to the arrest of a judge by the MNDF under the orders of the then President Nasheed. Nasheed then led his party, MDP to hold protests on the streets of Male’ City in less than 24 hours, describing the incidents as a coup.

“My direct view is that it was a coup. If reviewed, it would be evident.” Said Nasheed in the parliamentary session today.

The debate regarding the political unrest of 2012 has sparked again due to an incident involving former President Dr. Mohamed Waheed Hassan Manik, who took over the presidency from Nasheed when he resigned. The incident in question involved a verbal attack by an MDP activist against Dr. Waheed and his spouse Ilham Hussain who had been out for exercise in the Usfasgandu area of Male’ City.

Dr. Waheed is often referred to as a 'traitor' for his alleged involvement in the plot.

MDP: We won't forget or forgive, we will still call him a 'traitor'

MPs belonging to the governing MDP were vocal in their condemnation of Dr. Waheed and the incidents of 2012 in today’s session. Many MPs resorted to calling the former President Waheed a ‘traitor’ and vehemently said that they would keep on calling him so.

Lawmakers also said that there was no other name for the former president in their eyes for his role in organizing the coup.

Ungoofaaru MP Mohamed Waheed (Waddey) also alleged in today’s session that Dr. Waheed was falsifying the account of the alleged verbal assault. The matter is currently being investigated by Police.

South Hithadhoo MP Ibrahim Naazil also said that people were “not labeling him as a traitor enough’, while MP for West Henveiru Hassan Latheef said that he was surprised that the former President would think that citizens would call him otherwise.

MP Hassan Latheef said that ‘traitor Waheed who had carried out a coup’ had no other name to be communicated to by citizens. He said that it was not something that should be taken as an issue.

MP for South Galolhu Mickail Naseem said that he condemned Dr. Waheed for tweeting about the incident in a manner that made it seem as if it was a violent attack. He said that it was unacceptable that Police would commence an investigation into Jaufaru (the activist involved in the incident) for labeling the party responsible for years of pain and hardship as a traitor.

This was the main rhetoric of most MDP lawmakers in today’s parliamentary session.