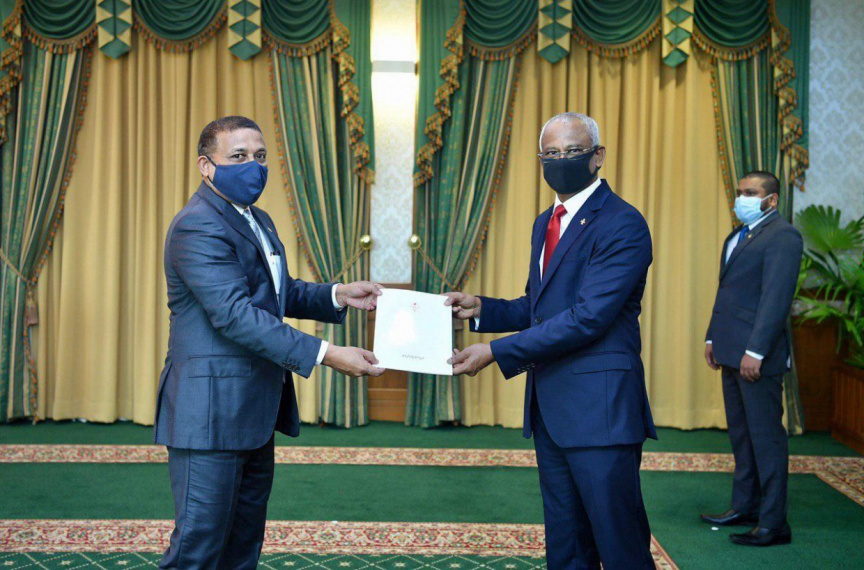 Mohamed Aslam (L) is presented with his letter of appointment as Minister of National Planning, Housing and Infrastructure by President Ibrahim Mohamed Solih (R) on June 14, 2020. (Photo/President's Office)

The appointment of Mohamed Aslam as the Minister of National Planning, Housing and Infrastructure has been submitted for approval to the parliament after the Housing Ministry was restructured under the Planning Ministry.

The session to approve Minister Aslam who currently serves as the Planning Minister is scheduled for tomorrow in the Parliament.

The mandate for the now merged ministry is also on the agenda for approval by the parliament.

Mohamed Aslam was appointed as the Minister of the two ministries today. The Housing Ministry was restructured last week after former Minister Aminath Athifa resigned due to ill-health.

President’s Office had stated that all the services of the Housing Ministry would be provided under the Planning Ministry when it was restructured.

Mohamed Aslam had also served as the Minister for Housing and Environment during the MDP presidency of 2008 as well.