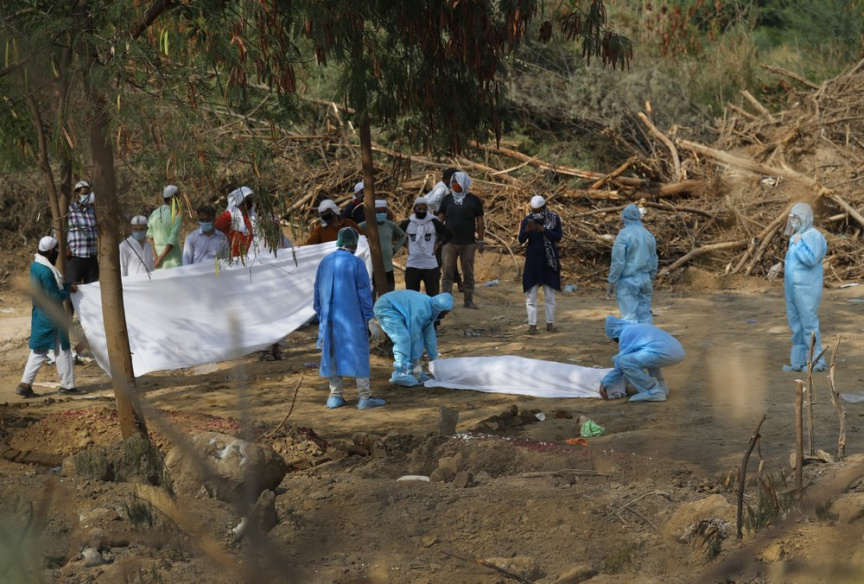 People in personal protective suits prepare to bury a relative who died of COVID 19 at a cemetery in New Delhi, India, Wednesday, June 10, 2020. (AP Photo/Manish Swarup)

SEOUL, South Korea (AP) — South Korea has reported 45 new cases of COVID-19, all but two of them in the greater capital area, continuing a weekslong resurgence that health authorities fear will develop into a massive wave.

The figures announced by the Korea Centers for Disease Control and Prevention on Thursday brought national totals to 11,947 cases and 276 deaths.

The capital of Seoul reported 21 new infections while 22 other cases were reported in nearby Incheon and Gyeonggi province towns.

The country has been reporting around 30 to 50 new cases per day since late May, mostly from the densely populated capital area where about half of South Korea’s 51 million people live.

Despite expressing concern over the steady rise in infections, government officials are resisting calls to reimpose stronger social distancing measures that were relaxed in April, citing concerns over hurting a fragile economy.

Their stance seems in contrast with the urgency conveyed by KCDC director Jung Eun-kyeong, who says health workers are struggling more and more to track transmissions that are spreading quickly and unpredictably as people increase their activities and practice less social distancing.

“There has been a consistent chain of transmissions spreading in the densely populated capital area. If we continue to fail to cut off these chains, we cannot rule out the possibility of a massive circulation,” Jung said during a virus briefing.

— HOSPITALS SWAMPED IN INDIAN CITIES: India reported a record of 9,996 new coronavirus cases over the past 24 hours with health services in the worst-hit cities of Mumbai, New Delhi and Chennai getting swamped by the rising infections. The Health Ministry on Thursday also reported an increase of 357 deaths. India’s tally of positive cases has reached 286,579 so far, the fifth highest in the world, and 8,102 deaths. Most Indian states have lifted lockdown restrictions, with train services partially restored and shops and manufacturing reopened. Subways, hotels and schools remain shuttered nationwide. The Health Ministry said testing capacity has increased and the number of recovered patients exceeds the number of active cases for the first time.

— CHINA’S NEW CASES ALL IMPORTED: China on Thursday reported a small spike in imported cases of coronavirus to 11. No new deaths or locally spread cases were reported. Just 62 people remain in treatment for COVID-19, with another 130 under observation and isolation for showing signs of the illness or testing positive for the virus without showing any symptoms, a safeguard against them possibly spreading it to others. China has reported a total of 4,634 deaths from COVID-19 — a figure that hasn’t changed in weeks — among 83,057 cases recorded since the virus was first detected in the central industrial city of Wuhan late last year.