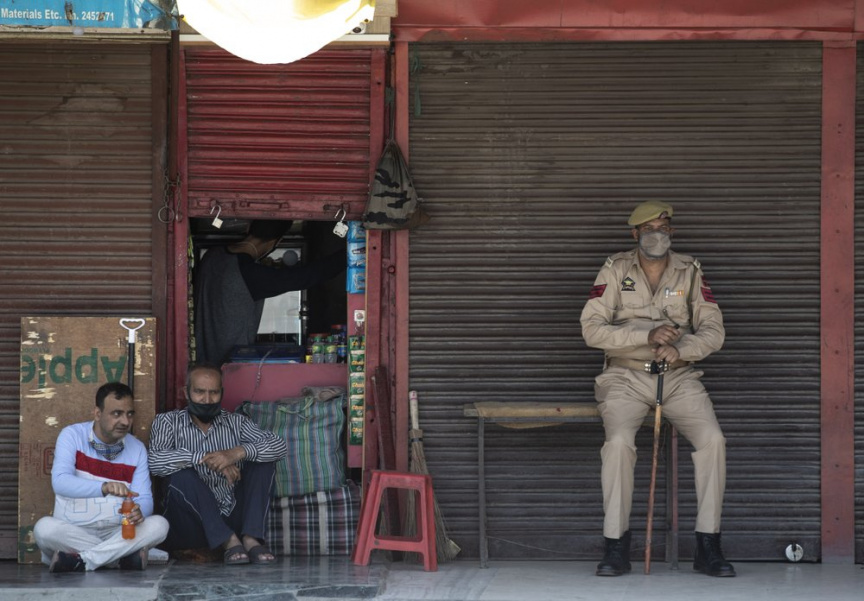 A policeman wearing a mask as a protection against the coronavirus keeps guard outside a half-closed shop in Srinagar, Indian controlled Kashmir, Tuesday, June 9, 2020. (AP Photo/Mukhtar Khan)

NEW DELHI (AP) — The number of coronavirus cases in India continued to rapidly increase Wednesday, with officials reporting nearly 10,000 new cases over the past 24 hours.

The spike has come as the government moves forward with reopening restaurants, shopping malls and religious places in most of its states after a more than two-month-old lockdown.

The government has already partially restored train services and domestic flights and allowed shops and manufacturing to reopen. Subways, hotels and schools and colleges, however, remain shuttered nationwide.

The actual numbers, like elsewhere in the world, are thought to be fair higher due to a number of reasons such as limited testing.

More than 4.9 million tests have been conducted in the country of 1.3 billion people, with daily testing crossing 140,000 people.

— KOREA TO REQUIRE QR CODE: South Korea has reported 50 new cases of COVID-19 as officials began requiring nightclubs, karaoke rooms and gyms to register their customers with smartphone QR codes so they could be easily located when needed. Since late May, the country has been reporting around 30 to 50 new cases per day, a resurgence that has threatened to erase some of the hard-won gains against the virus. The nationwide requirement of QR codes at “high-risk” venues come after a weeklong trial run in the cities of Seoul, Incheon and Daejeon. The government is also encouraging churches, libraries, hospitals and movie theaters to voluntarily adopt the technology. Critics have raised privacy concerns.

— CHINA REPORTS 3 CASES: China says its three latest cases of coronavirus infection were brought from outside the country. No new deaths were reported Wednesday and just 55 people remain in treatment for COVID-19, while another 157 were being monitored in isolation for showing signs of having the virus or having tested positive for it without showing symptoms. China has reported a total of 4,634 deaths among 83,046 cases of COVID-19 since the virus was first detected in the central Chinese city of Wuhan late last year.

— PROTEST OF NISSAN CLOSINGS: Disgruntled Nissan workers marched Tuesday evening in Barcelona in their latest protest against the Japanese company’s decision to shut its manufacturing plants in northeastern Spain. The closures will bring some 3,000 job losses. The company’s head of European operations said the closure was unavoidable as Nissan redrew its global business strategy. “We see no clear alternative to the closure and that’s the path we’re taking,” Gianluca de Ficchy said in an interview with El Pais. “The process has already begun.”